Electronic cigarette: sale to minors under the age of 18 prohibited 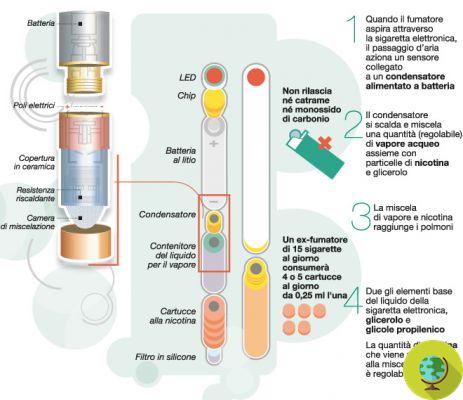 Forbidden to minors over 18 years. Electronic cigarettes with the presence of nicotine, as established by an order signed yesterday, April 2, 2013, by the Minister of Health Renato Balduzzi, can no longer be sold to those under the age of 18. The ban will be in effect from 23 April to 31 October next.

The electronic cigarette prohibited to minors of 18 years. Electronic cigarettes with the presence of nicotine, as established by an ordinance signed yesterday, April 2, 2013, by the Minister of Health Renato Balduzzi, they can no longer be sold to those under the age of 18. After the ban in public places in the small municipality of Vallo della Lucania, the new sales ban that raises the threshold from 16 to 18 years will be in force from 23 April to 31 October next.

Until the 23rd of the current month, in fact, the previous ordinance of last September, which set the prohibition of sale to minors under 16 years of age. What raised the age of the sales ban? The new ordinance was made necessary in accordance with the rule of the "Balduzzi Decree", which from 1 January 2013 raises to 18 years the age limit for the sale of tobacco products. The penalties for non-compliance with the ordinance are the same as those envisaged by the “Balduzzi Decree”.

So we read in a note from the Ministry, which explains how the minister had asked all'Higher Institute of Health an opinion on the assessment of the risk associated with the use of electronic cigarettes, in particular on minors, based on the latest scientific updates. The Higher Institute of Health provided its assessments on December 20, 2012, proposing a methodology for assessing the hazard which involves the application of a model that measures the absorption of nicotine from the different cartridges available, considering the use of electronic cigarettes by "smokers" at moderate, medium and high intensity of use.

What does the study say? The research has shown that, even for low-concentration products, the acceptable daily dose of nicotine, as determined by the European Food Safety Agency (EFSA), is exceeded even with only moderate use of electronic cigarettes. This evidence is even more significant in adolescents. “Therefore, harmful effects on health cannot be ruled out“, Explains the note, adding that a further opinion was also requested from the Superior Health Council.

It is precisely the Board of Governors that will now have to evaluate the study conducted by the Higher Institute of Health regarding the danger of electronic cigarettes, as well as establish whether electronic cigarettes, and refills containing nicotine or other substances, may fall within the definition of "medicinal product by function", even in the absence of an explicit intended use in this sense by the person responsible for placing it on the market.

On the decision, he expressed his appreciation the national e-smoking association, Anafe: "We welcome without any objection the order with which Balduzzi raised the ban on the sale of electronic cigarettes with the presence of nicotine from 16 to 18 years - says the president of the association, Massimiliano Mancini - and we think it is important that, for a product like the electronic cigarette, on which sufficient scientific studies have not yet been completed, think first of all of protecting minors “. But, the association warns, it is better to avoid unnecessary alarmist tones “often renewed by lobbies interested in curbing the spread of the electronic cigarette"About this new product" which is not a method to quit smoking, but which certainly represents a valid tool for risk reduction", Conclude Anafe.

Electronic cigarettes: boom, but how safe are they?

Electronic cigarettes: where to throw them to dispose of them correctly?

add a comment of Electronic cigarette: sale to minors under the age of 18 prohibited