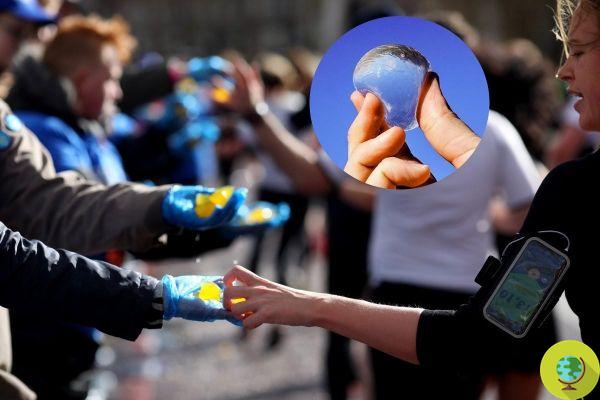 London Marathon increasingly sustainable thanks to the edible ball-shaped water bottle. In an effort to reduce plastic waste, participants were given biodegradable bottles.

London Marathon increasingly sustainable thanks to the edible ball-shaped water bottle. In an effort to reduce plastic waste, participants were given biodegradable bottles.


They look like bubbles, they are transparent, round and edible. We talked about them some time ago, but now they are very popular in sporting events that often leave behind a sea of ​​plastic waste.

The Ooho revolution, this is the name of the ball bottles, is that it is not only edible, but also biodegradable within 4-6 weeks. But not only that, in addition to being always fresh, it contains 5 times less carbon dioxide than PET and requires 9 times less energy.

It had already been used in the Harrow marathon by the startup Skipping Rocks Lab, now it arrives at the London marathon and is already a success. As we know, participants are usually given plastic bottles 'on the fly' which then end up on the ground, but the three Spanish engineers Rodrigo García González, Guillaume Couche and Pierre Paslier, wondered if it was possible to put an end to this ugly trend .

We are at mile 23 Of London Marathon handing out Lucozade Sport orange in Oohos! GOOD LUCK to all runners! We can’t wait to cheer you all on!! Any of our followers who are running? #londonmarathon #VMLM #madetomove pic.twitter.com/sFdTTWRjIj

The sphere has a gelatinous membrane formed by marine algae and calcium chloride, being natural it is therefore edible, but also cheap: to produce a bottle of Ooho you spend 2 cents.

Catch our team giving out #plasticfree @LucozadeSport hydration at the @LondonMarathon this weekend. We’ve got 30k edible @OohoWater pods to hand out! #LondonMarathon ? pic.twitter.com/P8NNfK44SQ

The grueling course of the English marathon therefore saw a green turning point: some of the participants then ate the sphere, others threw it on the ground without any risk for the environment. We were saying that it is biodegradable in a short time and it is certainly not like plastic that takes over 400 years to decompose.

The goal now is to produce this sphere on a large scale and distribute it not only in marathons. Small steps forward have been made, even if the road is uphill. The London marathon, in fact, was not completely plastic free, even if the organizers ensured that the plastic bottles distributed were made with recycling.

All those collected in Tower Hamlets, Greenwich, Southwark and Canary Wharf will be sent to a recycling facility. Good news, therefore, to avoid the catastrophic forecast that by 2050 there will be more plastic than fish in the sea.

A "super sand" that purifies and makes the water drinkable

How to reuse pasta cooking water: 10 good reasons not to throw it away

ISS: found traces of coronavirus in the wastewater of Milan and Rome, they are indicators of possible outbreaks

Water bottles: when and how should they be washed to avoid the proliferation of bacteria? The tests in the laboratory

DrinkPure: the filter that purifies water in an instant