Echinacea: more effective than drugs to beat the flu 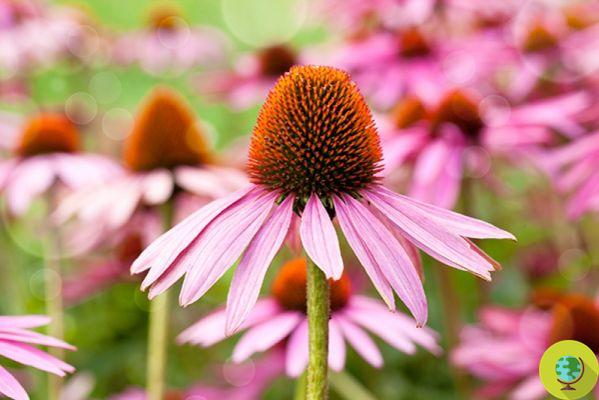 Echinacea is more effective than drugs for fighting the flu. New clinical research has revealed that a herbal product containing a special echinacea root extract is as effective as the conventional drug Oseltamivir (Tamiflu) for the early treatment of influenza.

L‘echinacea è more effective than drugs to defeat theinfluence. New clinical research has revealed that a herbal product containing a special echinacea root extract is as effective as the conventional drug. Oseltamivir (Tamiflu) for the early treatment of influenza.

The results of the double-blind study were published online in the scientific journal Current Therapeutic Research. This is a new confirmation of the benefits of echinacea in case of flu.

For the study, the researchers recruited 473 patients who had experienced flu symptoms for less than 48 hours. Patients were randomly assigned to take Echinaforce Hotdrink, a bevanda based on echinacea and European elderberry for 10 days, or Tamiflu (Oseltamivir) for 5 days, followed by 5 days of placebo. Echinaforce Hotdrink is currently produced by A. Vogel Bioforce and marketed in Switzerland. It can be found for sale online from foreign sites.

Tamiflu (Oseltamivir) belongs to a group of drugs called neuraminidase inhibitors. These drugs prevent the spread of the flu virus in the body and thus help relieve or prevent the symptoms that appear due to the flu infection. It is prescribed to prevent or treat the flu. It is a prescription drug. Echinaforce Hotdrink, on the other hand, is an over-the-counter product.

- experts they monitored the patients day after day and found that good recovery rates were present in both groups. Statistical analyzes revealed that the two treatments were not inferior to each other and that was approx equal in their therapeutic effects. After the established 10 days, the trend towards greater recovery from the flu rewarded patients who had taken Echinaforce Hotdrink.

According to experts, this is a significant clinical study documenting the health benefits of this specific Swiss Echinacea Extract. It is also one of the largest clinical studies on echinacea in terms of the number of patients involved.

La combination of echinacea and European elderberry led patients to overcome the flu like a real medicine, without the gastrointestinal side effects - such as nausea and vomiting - which affected some people who took Oseltamivir.

According to the study authors' conclusions, this was the case proven effectiveness di Echinaforce Hotdrink as a therapy for the treatment of influenza, comparable to the neuraminidase inhibitor Oseltamivir. Its early intake, at the appearance of the early symptoms of the flu, it is considered important to ensure the effectiveness of the treatment. An important plus point in favor of echinacea and natural remedies.

Cold and flu? The natural answer is echinacea
The 10 best herbal teas for colds and flu

add a comment of Echinacea: more effective than drugs to beat the flu