Ebola: has deforestation contributed to its spread? 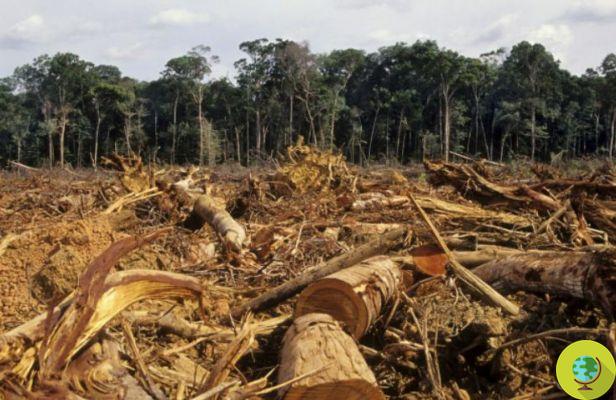 According to experts, deforestation has also contributed to the wide new spread of the Ebola virus, as a result of which infected bats have returned more in contact with humans


The epidemic of Ebola which is affecting the African continent but which also worries the United States and Europe more and more, where the first cases are beginning to be registered. It all started last December in a town called Meliandou, in Guinea. But how did the virus spread so fast? Can the deforestation have you played in his favor?

Let's take a step back and first try to understand what Ebola is exactly. It is a disease triggered by a very aggressive virus which first leads to an asymptomatic incubation phase, which can last from a few days up to a maximum of about 20, then a symptomatology that can be confused with that of other tropical diseases: vomiting, diarrhea, body aches, high fever, headache, etc. It seems that the mortality rate in case of being affected by this virus can even reach 90% since there is not even a specific therapy to counter the advance of the disease.

During the incubation period the affected person is not contagious, therefore it cannot transmit the virus, as soon as the symptoms appear instead the situation changes but it is direct contact with the patient is required and specifically with mucous membranes, non-intact skin, blood or secretions, but also with infected clothing or items.

The virus reappeared for the first time last December in Guinea and it was probably a bat so-called "some fruit”, That is, that African species that loves to stay on mango trees and palms. But why did he come into contact with man? Molto probably, due to deforestation, he could no longer find the usual trees far from the villages and was forced to get closer and closer to the inhabited centers.

To say this was recently Jordi Serracobo, biologist at the University of Barcelona, who gave a conference in Rome at the Lazzaro Spallanzani Institute for Infectious Diseases. As Serracobo explained during the meeting: “Deforestation and climate change mean that these animals, which usually live in non-urbanized areas, are increasingly in contact with humans. Furthermore, in Africa they are often consumed by the local population. This is how this increasingly close relationship with man affects the dynamics of the virus, increasing its danger ".

It therefore seems that once again we do not have to take it with the "cruel fate" that sends us diseases and epidemics but with ourselves that, having not been able to respect the planet that hosts us, we suffer the consequences more and more! Or is there something else behind it? In this regard, you can read the reflection on the Ebola epidemic of the Clorofilla blog.

According to the expert, However, we can rest assured at least here in Europe: “We must not be alarmed by the first cases of virus in Spain the surveillance system is working. There are too many differences between Europe and Africa, there will be no epidemic here ".

Ebola: Unlike Excalibur, the Texas dog will be isolated

add a comment of Ebola: has deforestation contributed to its spread?