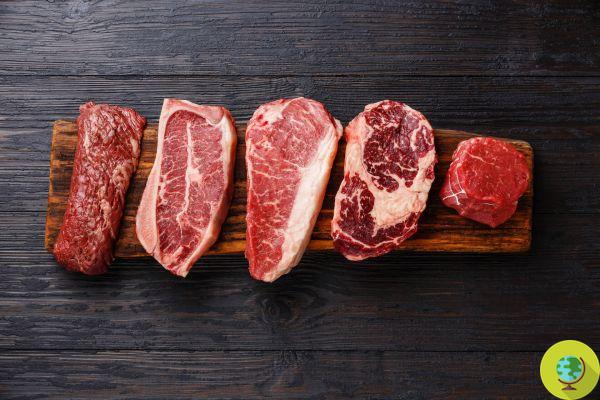 Who eats little red meat lives better and significantly reduces the risk of getting sick bowel cancer. It has been rumored that red meat was not really an elixir of life for a while, but now there is further scientific confirmation: colon cancer, and other forms of bowel cancer, can be prevented by reducing the risks as much as 50%, simply by cutting the consumption of red meat.


To put it in black and white is a British NGO, the World Cancer Research Fund, which recently focused on the analysis and comparison of 24 studies, carried out in recent years, dedicated to colon and intestinal cancer, giving life to the Continuous Update Project (CUP) which is the largest report ever conducted on the subject.

43% of this type of cancer derives from an improper diet, rich in fat and low in fiber. An unbalanced diet, low in vitamins and fiber and rich in animal fats and proteins, such as those given by red meat, weakens the body and increases the risk of getting cancer, especially of the colon and intestines.

Deleterious to heart and arterial health, today we discover that the habit of eating red meat often is closely linked to the increased risk of cancer.

"The latest research - concluded the researchers - has now established a definitive link between red meat and bowel cancer, while until a few years ago it was only probable". In particular, according to scholars, eat 100 grams of red meat a day it would increase the risk of developing bowel cancer by 17%, a percentage that would rise 36% with the same amount of processed meat, or those whose production process involves smoking, salting or adding preservatives to keep them longer.

So what do you need to eat to stay healthy?

In addition to abounding with fruit and vegetables and always doing a bit of movement, it is always good to opt for legumes: from broad beans to chickpeas, from beans to lentils, passing through peas and peas!