A pair of Spanish researchers examined the effects of some elements contained in cocoa and red currants on the retina of our eye. The results were astounding.


Red currants e cocoa berries they are an excellent source of polyphenols for our diet: the former are characterized by the presence of anthocyanins, a group of flavonoids associated with the protection of endothelial tissue; cocoa, on the other hand, is rich in flavanols and other polyphenols, as well as an excellent source of theobromine. Unlike coffee (another natural source of polyphenols), cocoa has a milder astonishing effect but can reduce blood pressure - while caffeine has been shown to increase blood pressure. A study conducted by a couple of Spanish researchers tried to understand if there are positive effects in the intake of these foods for our vision:

The retina is a highly vascularized tissue with a high oxygen demand that serves to ensure good vision - explains Dr. María Cinta Puell, author of the study. - If we consider that polyphenolic flavanols and anthocyanins have shown important benefits for the functionality of the endothelial tissue and for blood circulation in the brain.

The study involved 37 young people (17 women and 20 men) between the ages of 18 and 27. Participants underwent eye exams at three different times, after consuming a cocoa-based drink, a redcurrant-based drink and a glass of milk (a neutral substance); prior to the visit, they were asked to refrain from consuming caffeine-rich foods for at least 24 hours.

(Read also: We get most of the polyphenols from coffee (and that's not good at all))

To measure visual efficiency, participants in the experiment were shown reading signs placed at a distance of 4 meters, which differed in illumination - high (photopic vision) and low (mesopic vision). The result was that photopic vision improved significantly after taking cocoa, while only a slight improvement was perceived after taking red currant: this improvement is attributable to the flavanols and theobromine contained in the two drinks. The mesopic view, on the other hand, does not seem to have benefited from the intake of polyphenols.

For now, this is a pilot study. More research and investigation will be needed to confirm that the beneficial effect of cocoa and currants on human vision is indeed tangible. If so, these natural substances could be in the production of supplements that improve eyesight and attention. 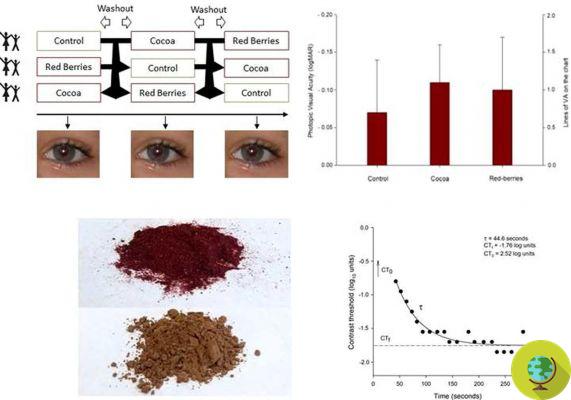