Eating peanuts to fight the allergy… to peanuts! 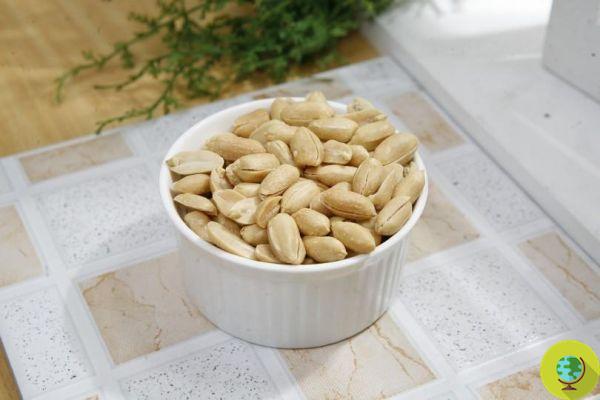 By introducing peanuts gradually, in small doses, it is possible to prevent the immune system from triggering the phenomena well known to those suffering from food allergies. An English search proved it

Yes, it may sound strange, but new research claims that to combat allergy to peanuts the simplest means is precisely that of eat the peanuts themselves, in small doses and little by little with the intention of making the body accept this food again.


To say it is an English study carried out at Addensbrooke's Hospital in Cambridge and published in The Lancet which took as a sample 99 children and teenagers between 7 and 16 years old allergic to peanuts. Half of them were given peanuts in the form of flour mixed with the rest of the food they ate, gradually increasing the dose to a maximum of 800 mg of peanut protein per day. The other group, however, continued to avoid this food as usual.

At the end of the experiment, after six months, 84% of the children in the first group were able to eat a certain amount of peanuts (up to a maximum of 10 per day) without any consequences. In the other group, however, there was no change with respect to peanut tolerance.

What the researchers found is that introducing peanuts gradually, in small doses, it is possible to prevent the immune system from triggering the phenomena well known to allergy sufferers, which in the most serious cases can lead to anaphylactic shock and death. With this trick, the immune system is sent to accept small doses of that food.

“This treatment allowed children with peanut allergies to eat large amounts of peanuts, well above the levels found in contaminated snacks and meals, freeing them and their parents from fear of a potentially life-threatening allergic reaction. I would say to the families involved in the study that this has radically changed their lives, ”said Dr Andrew Clark, coordinator of the research.

More scientific evidence is obviously needed but the researchers were very optimistic believing that soon the antidote against peanut allergy, that is this system of gradual administration of peanuts themselves, could become a real cure.

- Food intolerances and allergies on the rise. Because?

Eating organic: the benefits backed up by scientific research ❯

add a comment of Eating peanuts to fight the allergy… to peanuts!