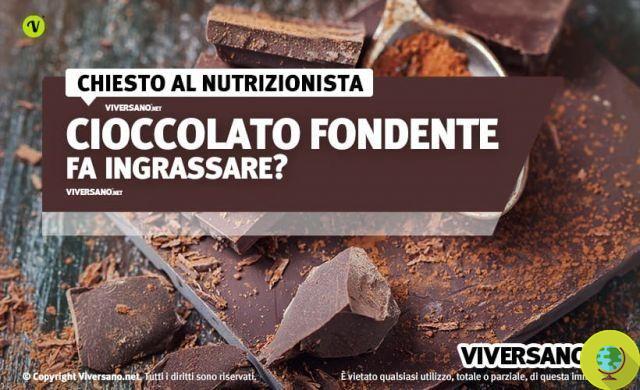 Consuming chocolate regularly helps you lose weight. This is not a contradiction, but good news that came directly from the United States following specific scientific studies. Chocolate, especially if dark, would help the body fight cholesterol and lower blood pressure. Thanks to this rebalancing action, our body would consequently be able to better exploit the nutrients for its functions and to keep itself leaner.

To consume chocolate regularly helps lose weight. This is not a contradiction, but good news that came directly from the United States following specific scientific studies. The chocolate, especially if dark, would help the body to fight the cholesterol and to lower the pressure. Thanks to this rebalancing action, our body would consequently be able to better exploit the nutrients for its functions and to keep itself leaner.

The credit would be all of the antioxidants contained in chocolate, substances also able to fight free radicals and counteract theaging of skin tissues, giving us a more youthful appearance. Experts suggest consuming chocolate about twice a week in order to enjoy the beneficial effects of this beloved food. If, on the one hand, chocolate contains a quantity of calories for which until now it was often excluded from slimming diets, on the other hand, this aspect would be counterbalanced by the presence of substances capable of promoting weight loss and the synthesis of fats.

The study in question was conducted by a group of researchers from the University of California at San Diego, under the guidance of Beatrice Golomb. According to experts, the consumption of chocolate should be linked to a reduced Body Mass Index or BMI (Body Mass Index). On the other hand, there would be no precise indications on the quantity of chocolate to be consumed so that the food exerts its positive effects on our weight.

In any case, researchers tend to point out that excess calories are not the only factor contributing to the accumulation of extra pounds. In this context, the composition of the foods themselves seems to count more and more, with particular reference to fats and antioxidants.

Therefore, it would not only be the amount of calories ingested that would have a final impact on weight, but theirs quality. Flavonoids could be directly responsible for improving the muscle tone of those who consume chocolate on a regular basis and within a balanced diet.

Which chocolate to choose? From a food point of view, the dark chocolate it has a higher percentage of cocoa and consequently a more consistent antioxidant content. The real dark chocolate does not contain any animal derivatives and is therefore suitable for those who have decided to follow avegan food.

However, the much vaunted chocolate hides some pitfalls - which we had already told you about - relating to animal testing and child exploitation. In order not to contribute to the support of such bitter realities, we suggest you avoid the offending brands as much as possible and orient yourself on cocoa and chocolate-based products from fair trade.