Eat fewer steaks to save more wolves and bears

Have you ever thought that eating your steak contributes to the death of wildlife and the loss of biodiversity? A new campaign launched by the Center for Biological Diversity aims to make people more aware of the connection between eating meat and the health of animals such as endangered wolves and bears.

Have you ever thought that by eating your steak you are contributing to the death of wildlife and the loss of biodiversity? A new campaign launched by Center for Biological Diversity aims to make people more aware of the connection between eating meat and the health of wildlife such as wolves and bears on the verge of extinction.

The initiative, called “Take Extinction Off Your Plate”, "Keep extinction off your plate“, Shows how meat production is one of the main causes of global environmental degradation, and that we are to eat meat contributing to the deaths of predators and wild grazing animals. One figure above all: the production of beef, pork, poultry and other meats tripled between 1980 and 2010 and will probably double again by 2020.

This growing consumption of meat in a world of over 7 billion people is already having an impressive effect on fauna, habitat, water resources, air quality and climate. Wolves, moose, bears, prairie dogs and numerous other wild animals "pay the price of meat production", underlines the Center.

Some are killed for preying on cows; others die en masse to make way for agricultural operations; all are endangered by pollution and greenhouse gas emissions that exacerbate climate change. Grazing also does unspeakable damage, degrading grassy habitats and destroying vegetation. 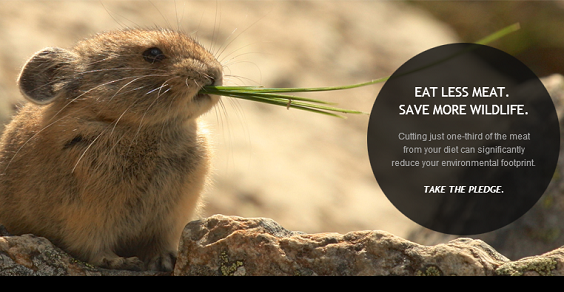 What to do? To reduce our meat consumption, we can keep extinction out of our plates (e improve our health, together with that of the whole planet), says the campaign for an eco-friendly diet. And while it's hard for the world to become wholly vegetarian or vegan anytime soon, too significantly reducing the amount of meat that each person consumes could alleviate the pressure on wildlife. On the other hand, animals are not the only living beings with a future at risk. Our very survival is at risk.

To join the movement for an eco-friendly diet click here

“Less, but better”: the right way to eat meat that will save the world?

Eating less meat would save the lives of 75 people a year. Confirmation in a new study ❯