E. coli: in the US more than 200 people infected with minced meat

There are nearly 200 people infected with Escherichia coli (E. coli) in the United States, located in 10 different states. Under accusation, for what is considered a real epidemic, is the minced meat.

People infected with Escherichia coli (E. coli) in United States there are almost 200, located in 10 different states. Under accusation, for what is considered a real epidemic, is the minced meat.


In recent days, another 19 patients have been added to the already high number of E. coli cases linked to the consumption of infected ground beef that is occurring in the United States. The Centers for Disease Control and Prevention (CDC) spoke about the problem on April 5. In the meantime, we have gone from 72 infected people in five states to 196 current cases, found in 10 states.

With the addition of more and more affected patients, the epidemic therefore does not seem to stop. To date, the CDC reports that the first known patient became ill on March 1 and the most recent on April 19. However, it is likely that several cases still need to be added to the list as it takes a technical time for the person to get sick, verify the presence of the bacterium through the tests and test confirmation stages, and finally get it back into the system. of public health reporting.

The infected people are aged less than 1 year up to 84 years with an average age of 19 years. 52% are women, 28% have been hospitalized, and two patients have developed a dangerous form of kidney failure called hemolytic uremic syndrome (HUS) severe, rare but possible consequence of this type of infection.

Symptoms of E. coli presence vary from person to person but often include severe stomach cramps and bloody diarrhea. If there is a fever, it is usually not very high, and most people recover within a week. 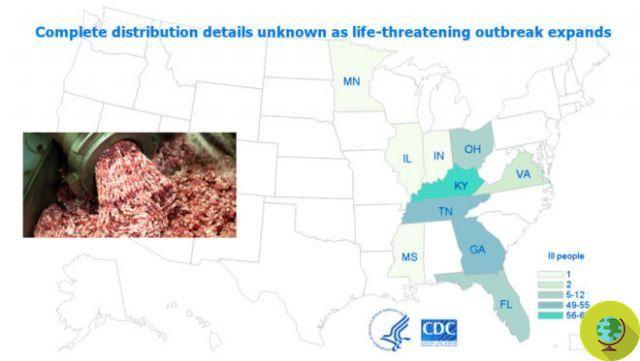 But what is causing all these cases of E. Coli infections? Almost 80% of the infected remember having consumed minced meat in the days preceding the onset of symptoms and, not surprisingly, two companies: K2D Foods and Grant Park Packing recalled products of this type for the E. Coli risk.

All consumers, shopkeepers and food service operators were asked (and still are today) to check if they have the minced meat recalled in their freezers. Freezing is not enough to kill E. coli bacteria.

The investigation, which spanned several states, began on March 28, when Kentucky and Georgia officials notified the CDC of the problem. Investigators from Tennessee also confirmed the presence of E. coli in ground beef from a local restaurant where some people had fallen ill immediately after eating. However, the CDC continues to report that sufferers have handled or eaten ground beef from a variety of sources in addition to restaurants. In short the problem is serious and widespread.

add a comment of E. coli: in the US more than 200 people infected with minced meat