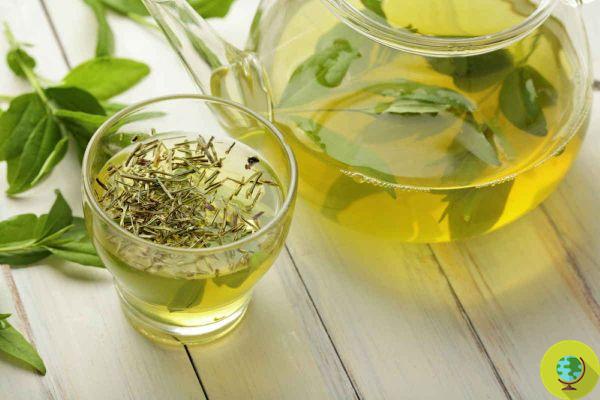 Habitual consumption of green tea would be associated with a lower risk of cardiovascular disease and iron health.

Consume tea, especially the green tea, at least three times a week guarantees a longer and healthier life. Habitual consumption of this drink would in fact be associated with a lower risk of cardiovascular disease and iron health.


This is confirmed by the results reported in the European Journal of Preventive Cardiology of a study carried out on 100.902 Chinese adults (belonging to 15 provinces of China) who had no history of heart attack, stroke or cancer.

Scholars found that regular green tea drinkers had a 20% lower risk of heart disease and stroke compared to those who never drank tea or consumed it only infrequently. Furthermore, those who drank tea regularly were 1,41 years older in the absence of atherosclerotic cardiovascular disease, and their life expectancy was 1,26 years longer than the index age of 50.

Of the regular tea drinkers, 49% drank green tea, 43% preferred scented teas or other teas, and 8% opted for black tea. It has all been found that tea consumption may be linked to a reduced risk of atherosclerotic cardiovascular disease and all-cause mortality, but green tea consumption, compared to black tea, is associated with even lower risks of around 25%. % for heart disease, stroke and death in general, scholars say.

The reason? According to the researchers, it could all depend on the polyphenols in tea, chemicals with antioxidant properties.

What happens if we consume green tea 3 times a week?

According to the study, regular tea intake would already help lead a healthier life, but the main factor is still the presence of polyphenols, of which green tea is particularly rich, bioactive compounds that would protect against cardiovascular diseases and risk factors including hypertension and dyslipidemia. In the case of black tea, however, since it is not completely fermented, the polyphenols end up oxidizing in the pigments and thus losing the antioxidant effects.

What are you waiting for, then, put the kettle on!