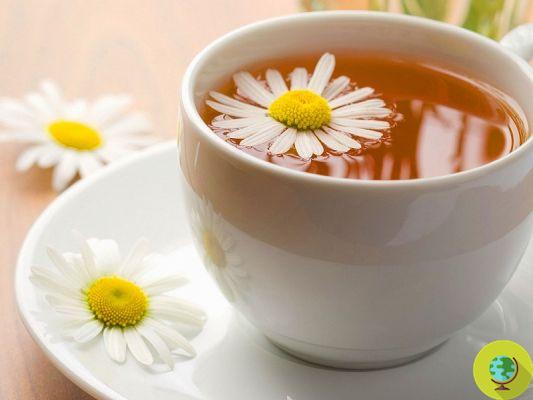 Drinking a cup of chamomile tea a day extends your life. Chamomile is one of the most used and most famous grandmother's remedies, for example to relax or in case of stomach pain. Now science is delving into the extraordinary properties of chamomile tea, a real panacea for health.

Drink a cup of chamomile per day prolongs life. Chamomile is one of the most famous and most used grandmother's remedies, for example to relax or to aid digestion. Now science is delving into overtime properties of chamomile tea, a real panacea for health.

According to a new study, chamomile helps us live better and longer. Scientists fromUniversity of Texas they took into consideration the effects of chamomile which occurred on a sample made up of 1667 subjects, between men and women.

The results of the study were published in the journal Gerontology and highlighted the usefulness of regularly drinking chamomile tea because of its anti-inflammatory properties and why it is a real one natural antioxidant, as well as a remedy that really can protect us from infections.

According to experts, drink an infusion of chamomile flowers every day reduces the risk of death by 29% preterm compared to those who do not take this infusion daily. The merit of this beneficial effect is due to the presence of antioxidants in the drink. In particular, the reduction in the risk of death would be particularly evident in women aged 65 and overi.

This is certainly good news that will later have to be confirmed by further studies which, for example, could consider some variables, such as the nutrition and diet of the participants. Furthermore, the new study only concerns subjects belonging to the Hispanic community.

Further investigations will also be needed on the effect of consumption of chamomile in meni, who according to the data available to researchers consume this drink much less frequently than women. Are we ready to rediscover chamomile as a beneficial drink? It could be a long life elixir really cheap and affordable for everyone.

Chamomile: properties, uses and contraindications
Chamomile: how to grow it on the balcony and recipes for using it