We reveal how to prepare dorayaki, the iconic sweets of the Japanese tradition. Here is the recipe from the book "The enchanted kitchen" 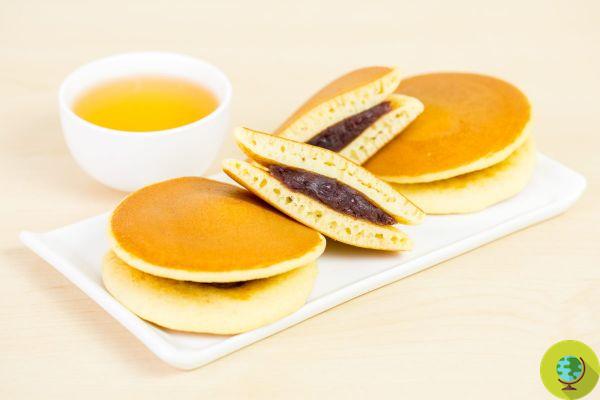 We reveal how to prepare dorayaki, the iconic sweets of the Japanese tradition. The recipe that we propose is inspired by the masterpiece "Kiki - Home delivery" by Miyazaki and is taken from the book "The enchanted kitchen", published by Trenta Editore

I dorayaki they are a sweet beloved in Japan, both by adults and by children and are now known all over the world because Doraemon, the adorable blue cat, protagonist of the cartoon of the same name, was greedy. Their shape and flavor are very reminiscent of pancakes, but have a softer texture.

Preparing them at home is very simple. How? Just follow this recipe, taken from the book "The enchanted kitchen" by Silvia Casini, Raffaella Fenoglio and Francesco Pasqua, a real treat for lovers of the master's works. Miyazaki who want to know new details and curiosities of Japanese culture, experimenting with some typical dishes shown in the famous animated films of Studio Ghibli.

In a bowl, beat the eggs with the sugar until they are swollen, light and frothy; then add a little at a time the flour mixed with the yeast: the mixture must be firm like the dough of the sponge cake, not like a crêpe batter.

Heat a non-stick pan lightly greased with a little oil, pour a little mixture in order to have 2 discs of about 10 cm in diameter. Cook them without touching them for a couple of minutes and turn them so as to brown the other side as well.

Spread the azuki bean jam on a dorayaki and pair it with another. Serve them with a glass of milk, tea or fruit juice.

Do you sleep with the light on? The side effects on heart and blood sugar you don't expect ❯