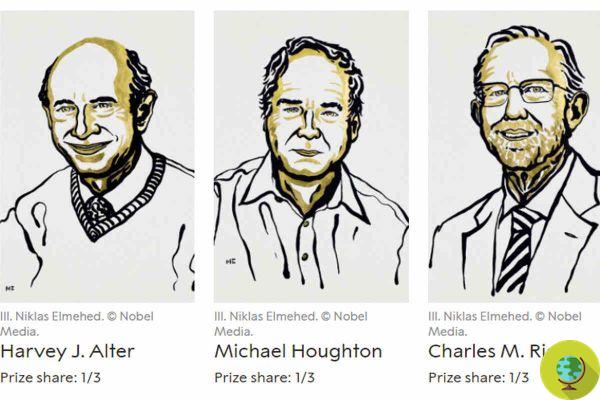 Harvey J. Alter, Michael Houghton and Charles M. Rice: these are the three doctors who today - at the opening of Nobel Week - won the Nobel Prize in medicine. They have the merit of having discovered the hepatitis C virus and thus being the first to identify the person responsible for a disease that until recently was incurable.


As the Nobel Foundation writes, their discovery "revealed the cause of many cases of hepatitis whose origin had not yet been discovered, paving the way for the possibility of diagnosing through blood tests and developing drugs that saved millions of lives ".

Nobel Prize in Medicine to the trio of scientists who discovered how cells adapt to oxygen levels. Fundamental for cancer research

Harvey J. Alter, 85, a New Yorker who graduated from the University of Rochester, where he worked for a while before moving to Seattle. Since 1961 he has worked for the National Institutes of Health (Nih), except for a brief period in which he carried out his duties at Georgetown University.

Rice, 65, was born in 1952 in Sacramento and graduated from the 1981 California Institute of Technology (Caltech). From 86 he worked at Washington University School of Medicine in St Louis and since 2001 he has taught at Rockefeller University in New York, where until 2018 he directed the Hepatitis C Research Center.

British Houghton graduated in 1977 from King's College London and later worked for GD Searle & Company and Chiron. Since 2010 he has been teaching at the University of Alberta.

Gut microbes hold the key to reversing brain aging and turning back the biological clock? ❯