Do you suffer from insomnia? Maybe it's your genes 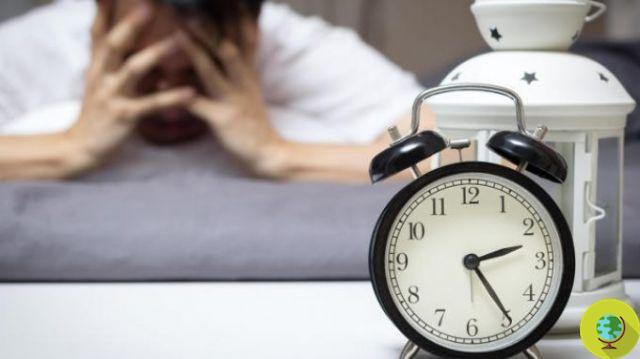 Do you suffer from insomnia? It could be the genes you inherited from your parents. The causes of insomnia are many and in some cases genetic factors may be present, at least according to Harvard researchers.


You suffer from insomnia? It could be your fault genes have been identified.. The causes of insomnia are likely to be multiple and genetic factors may be present in some cases, at least according to researchers from Harvard.

The study in question was conducted by taking into consideration over 47 individuals of European origin. A longer sleep duration has been associated with a more favorable metabolic profile and a lower risk of attention deficit hyperactivity disorder.

According to experts, the habitual duration of sleep it's a hereditary trait which can be linked to cardio-metabolic and psychiatric diseases. But little is known about the genetic variants that influence this trait. The result of the study on European subjects, which brought the researchers' attention especially to chromosome 2, reappeared in a sample made up of 4771 African-American individuals.

A opinion of Daniel Gottliebsleep patterns are influenced by genetic differences among the study authors. This is one of the first studies that begins to identify genetic differences and hopefully it will help better understand the causes of sleep disorders and their relationship to other diseases.

Scientists believe that some aspects of sleep, including how long it lasts, are to some extent hereditary. Furthermore, the duration of sleep can be linked to conditions such as diabetes, high blood pressure and depression, as Gottileb pointed out.

The researchers identified two genetic variations, one of which has been linked to approximately 3 more minutes of sleep per night. Experts know that this effect of genes on a night's sleep is quite small, but it can still be part of the many mechanisms - perhaps hundreds - that affect how we sleep.

In the opinion of experts, understanding the principles behind these associations can help to clarify the biological mechanisms that influence the duration of sleep and its association with psychiatric, metabolic and cardiovascular diseases.

Do you suffer from PMS? Try green anise for symptom relief ❯

add a comment of Do you suffer from insomnia? Maybe it's your genes