Do you know what's really inside surimi? Here's why you shouldn't eat it 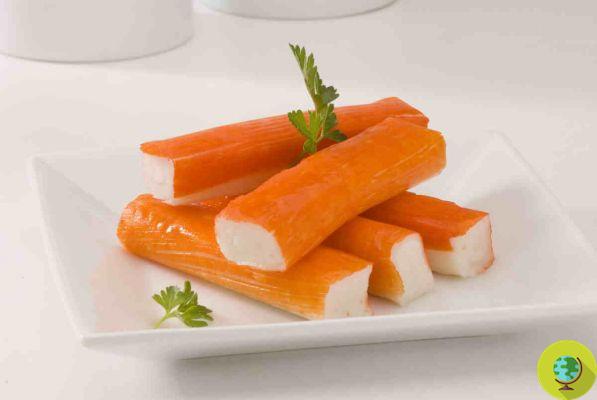 Surimi is not an exotic food, as its name might suggest, but a type of food conceived by the food industry in order to enrich its market with products of various shapes, starting with the actual surimi, consisting of small cylinders from the outside red or orange and from the inside white, up to the fish cuts and fake crab claws.

Il surimi it is not an exotic food, as its name might suggest, but a type of food created by thefood industry in order to enrich its market offer with products of various shapes, starting from the real surimi, consisting of small cylinders red or orange from the outside and white inside, up to sliced ​​fish and to fake crab claws.

Its implementation process involves various stages of freezing, thawing and cooking, which confirm its artificial nature. Its real composition remains doubtful and not without possible health risks related to the ingredients used.

Here are five reasons why surimi should be avoided altogether.

Surimi can be considered one of the false foods that it would be advisable to avoid within a healthy and natural diet. It is in fact sold as a food based on crab meat, but surimi doesn't actually contain any. The alleged "Crab flavor" it is obtained through the use of artificial flavors. From surimi are obtained precisely the "fake" crab claws, "sliced" sea, surimi "smoked salmon" or other products similar in shape to crustaceans such as prawns with an artificial taste of fish. It is a set of artificial foods that none of us need in our diet.

Surimi certainly cannot be considered a top quality food. Its industrial processing happens using the scrap parts from other foods, such as cod, mackerel, horse mackerel and different species of Asian carp. The pulp used for the production of surimi comes from industrial waste and from processing leftovers from other food preparation processes using various machines. The waste is industrially processed, pressed and added with various types of chemical substances.

By processing the waste parts of other foods, a practically tasteless white pulp is obtained. The time has therefore come to enrich the preparation of surimi by using additional substances that can improve its appearance, flavor and conservation. In order to improve conservation, before the freezing salt is added, sugar e polyphosphates. In later stages the surimi will be added with dyes to obtain the typical red or orange shades that characterize the external surface.

Others additional ingredients used that have nothing to do with fish are potato starch, to improve its conservation at low temperatures, theegg whites, as a dye to obtain lighter shades or a more glossy appearance, i vegetable fats and artificial flavors of crab or lobster. Everything is obtained through deep manipulations and through various stages of cooking, freezing and thawing. The product undergoes numerous washes that lead it to be poor in vitamins and mineral salts. Among flavor enhancers used we find the monosodium glutamate (E653) and among the vegetable oils that could be used for its production there are low quality products such asrapeseed oil andPalm oil.

They wouldn't exist at the time of obligations relating to the indication in label of the fish species used for the production of surimi. This could lead to the use of poor quality, really poor, or even toxic raw materials. The consumer could fall victim to some fraud that could relate to the use of faulty or infected raw materials, the addition of sulfur dioxide, the use of seed oil instead of olive oil and the use of sophisticated wine vinegar with acetic acid.

There is also the risk of the presence of additives or prohibited preservatives or employed above authorized levels. Some companies may use polyphosphates, alleged to be harmful to bones, if taken in large quantities, as it is able to act by removing calcium from our body. Contaminants that may be present in surimi could be identified pesticides e heavy metals, as indeed can happen for common fish, whose waste is used for the production of surimi. Finally, it can contain high amounts of sodium, able to make it a food not recommended for those suffering from hypertension or kidney diseases.

The products based on surimi, although they can be considered as real false foods, usually have some rather high costs, especially taking into account how they are obtained from second choice food materials, with the addition of preservatives and dyes of dubious origin. The same crab flavor is achieved artificially. If fish is one of the foods you do not want to give up, it would be better to buy "real" fresh fish rather than a substitute made up of food waste such as surimi. To orient your choices in a different way, it is sufficient to realize how surimi is a finished product contain a percentage of fish really low, variable between 30% and 40%, which cannot justify the price requested from consumers at the time of purchase.

Withdrawn preparation for Pedon cakes: soy not declared on the label ❯

add a comment of Do you know what's really inside surimi? Here's why you shouldn't eat it