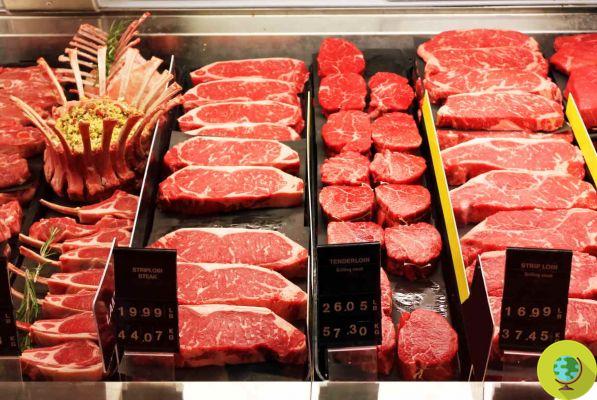 There are already numerous scientific publications that link the intake of meat - especially red or ultra-processed meat, such as sausages and cured meats - to an increased risk of incurring chronic pathologies (diabetes, cardiovascular disease) or in forms of tumor. Now a new study has analyzed the link between the intake of animal proteins and the onset of certain inflammatory bowel diseases, such as ulcerative colitis.


The survey was conducted on the European population, collecting clinical data and information on the eating habits of about 420.000 volunteers from eight countries of the continent: the participants were subjected to questionnaires relating to the frequency with which they consumed certain foods. Particular attention was given to the intake of proteins and their origin (vegetable or animal).

The intersection of data relating to the lifestyles held by the people participating in the survey and those relating to their health conditions led to the creation of a proportional risk model. The study followed the patients for a period of sixteen years, after which 177 participants with Crohn's disease (CD) and 418 with ulcerative colitis (UC) were identified.

Il Crohn's disease it is characterized by chronic inflammation of the small intestine and colon which can manifest itself as chronic diarrhea, abdominal cramps and blood loss in the stool. Also there Ulcerative colitis it is a chronic disease that affects the intestine, primarily the rectum, and which manifests itself with diarrhea, pain in the abdomen and the presence of mucus in the stool.

(Read also: Colon cleansing: how to purify yourself with water and salt)

Analyzing the results, the researchers did not notice any association between protein intake (whether animal or vegetable) and an increased risk of Crohn's disease or ulcerative colitis, except in the case of consumption of red meat: in fact, otherwise from other animal-based protein sources (fish, poultry, shellfish, eggs, cheese), only red meat appears to be linked to a higher risk of UC.

One more reason (if there was still a need!) To abolish, or at least reduce, the consumption of red meat in one's diet: in addition to representing damage to the environment and suffering for slaughter animals, it also damages the our health, exposing us to the risk of serious diseases.

Eat more fiber to reduce the risk of this liver disease ❯

add a comment of Do you eat too much meat? You risk a really dangerous side effect for the lining of the intestine, the study