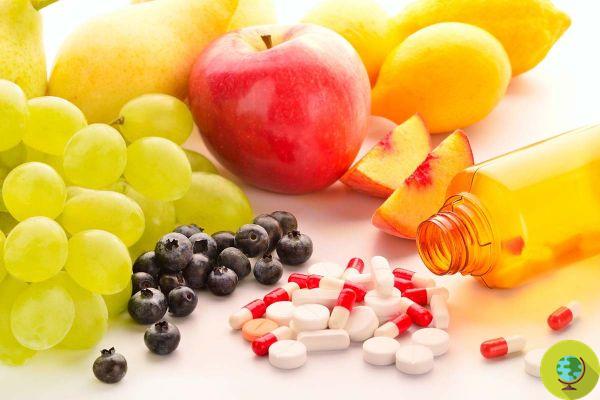 A new study shows that those who take multivitamins believe they are healthier. In reality there are no differences with those who do not hire them

A new study shows that those who take multivitamins believe they are healthier. In reality there are no differences with those who do not hire them

When we hire a multivitamin supplement we are sure that this will have a certain beneficial effect on our body. According to the results of a study conducted at Harvard, however, the situation could be very different. What if the benefits were only in our minds?


According to a new study by a team from Harvard University and published in The BMJ, the health benefits of taking multivitamin supplements it could just be an effect of our mind. The research would therefore confirm what has already been supported by another study conducted by the University of Toronto (Read: Multivitamin and mineral supplements do not bring any benefit to our health.)

In practice, a bit like theplacebo effect, people's positive expectations would underlie the health effects of multivitamins. According to a research team led by Manish Paranjpe, there would be no concrete evidence of the real effectiveness of these supplements taken regularly and without overt deficiencies.

Multivitamins and supplements are widely used by the population and the industry that produces them is worth billions of dollars, but a number of clinical studies have failed to identify tangible health benefits for people without vitamin deficiencies. This has led Dr. Paranjpe to examine whether there is by chance the subconscious behind the health improvements of those who take such supplements on a regular basis.

For the study, the researchers collected data on 21.603 adults in the United States who took part in the 2012 National Health Interview Survey. Of the sample, 4.933 people reported taking regular multivitamin or mineral tablets.

Participants were asked to self-assess their health and were questioned about five outcomes related to physical, psychological and functional health. The questions included whether people needed help with routine daily activities and whether they had a history of long-term health problems, including high blood pressure, asthma, diabetes, or arthritis.

They were also asked if they had suffered from any health problems in the past 12 months. Such conditions include infections, memory loss, neurological and musculoskeletal problems, or psychological stress.

The results? People who hire multivitamin supplements they believe they are healthier but in the end there are no variations in the physical, psychological and functional parameters analyzed. That is in layman's terms those who took supplements believed they were healthier than those who did not, although in reality there were no differences real in measurable health outcomes.

“People who regularly take multivitamins or mineral supplements reported having 30% better overall health than those who don't. But there was no difference between those who took them and those who did not in any of the five psychological, physical or functional health outcomes assessed ”. Manish Paranjpe said.

An in-depth analysis showed that people who took multivitamin or mineral supplements tended to believe they enjoyed better health, regardless of race, gender, education, age and income.

The researchers offer two possible explanations for the results obtained: either people who regularly take supplements are convinced that these will improve their health, or they are generally more positive about their personal well-being, regardless of what they take.

In both cases, however, the supplements have nothing to do with it. Indeed, there is a growing body of evidence that the power of positive thinking can improve various health conditions.

“This is an observational study, so [we] cannot demonstrate a causal relationship between the use of multivitamin and mineral supplements and health under assessment. Additionally, subjectively assessed health is not always reliable, and we have not tracked changes in health before and after taking long-term supplements. However, the lack of any difference in assessed health outcomes is in line with other studies indicating that multivitamin or mineral supplements do not improve overall health in the general adult population, ”the researchers concluded.

In essence, Harvard experts remind us that for those on a healthful diet, a multivitamin may have little or no benefit. A diet that includes lots of fruits, vegetables, whole grains, good sources of protein and healthy fats can provide most of the nutrients needed for our health.

There are also situations of actual deficiency of vitamins or minerals and in that case the doctor will decide if and with what to integrate.

The most effective natural supplements you may need ❯

add a comment of Do multivitamin supplements really work? The Harvard study