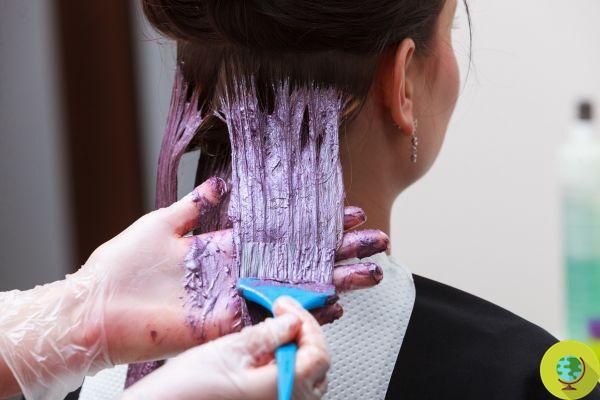 To avoid the risk of breast cancer, you should not dye your hair more than six times in a year and use mainly natural ingredients: the new alarm from an English breast specialist.

Hair dyes and tumors. You shouldn't dye your hair more than six times a year and use mostly natural ingredients. In fact, those who use chemical hair dyes would be more likely to get sick breast cancer. Alarmism or is there really to worry about?


The alert was raised by London-based breast surgeon Kefah Mokbel of Princess Grace Hospital, who reviewed research showing that women who dye their hair are 14% more likely to have breast cancer. For this reason, women should "reduce exposure" to synthetic dyes by using ingredients such as henna, beetroot or rhubarb instead and "undergo regular breast checks from the age of 40".

News that, however, is already reflected in recent research in which the various risk factors of breast cancer were explored, including hair products such as dyes and conditioning treatments. But now, as Mokbel himself declares:

"Further studies are needed to confirm these results." And, as Sanna Heikkinen of the Finnish Cancer Registry explains, for the moment "only a statistical association has been observed between the use of hair dye and the risk of breast cancer, but it is not possible to confirm a real connection between the two events. The observed association could be due, for example, to the fact that women who usually do many hair dyes in a year also use other cosmetics than women who do not have the habit of dyeing themselves ".

Are other unhealthy habits or lifestyles to be indicted as risk factors for breast cancer? Likely, but it is not impossible that hair dye is one of them.

What is certain is that in Directive 54 of 2007 the European Commission had 22 substances contained in hair dyes are prohibited and for which the manufacturing companies have not provided a safety data sheet. Last year, with the definitive entry into force of the decree of 2/04/2008, some hair dyes were withdrawn from the market due to the presence of banned substances recognized as carcinogens.

In particular, the substance considered to be the main cause of small allergic phenomena, such as redness, but also of more serious breathing difficulties or anaphylactic shock, is the para-phenylenediamine (PPD), a contact allergen, which, together with toluene-2,5 diamine (PTD), is classified by the recent European Union provision as a “highly sensitizing allergen product”, without however imposing a ban on it. The Commission has in fact only reduced maximum concentrations authorized as a precaution.

Commercial dyes that include these substances must state on the label that "hair coloring products can cause severe allergic reactions" and that "they are not suitable for people under 16 years of age". In essence, the use of hair dyes is discouraged if spots appear on the face, skin irritation or other allergic manifestations.

Otherwise it could all be latent.

On breast cancer, you may also be interested in:

This is why, as usual, we also recommend that you use the less possible to chemical dyes and prefer natural colors. Read our article on hair dyeing and highlighting herbs.

add a comment of Do Hair Dyes Increase Breast Cancer Risk? Six in a year the maximum limit