There are many remedies to keep mosquitoes away, but where does their effectiveness lie? A new study tried to find out

There are many remedies to keep mosquitoes away - from the chemical ones we find in pharmacies to the more homemade ones (like citronella candles or basil plants). But why are these remedies effective? A new study tried to find out, starting with pyrethrum.


Le mosquitoes they are among the most widespread - and annoying - insects in the world. They invade our homes every summer, annoying with their buzzing and itchy stings. However, they can also be very dangerous, because they carry serious diseases such as malaria or yellow fever: it is estimated that every year more than a million people die from a disease caused by the bite of this insect.

The methods to keep them at a distance (without necessarily killing them) are many, and now a new study tries to shed light on why the repellents are so effective: there would be a receptor on the antennae of these small insects that warns to keep away from certain substances.

In fact, a recent study has identified an 'odor receptor' in mosquitoes that would help them keep away from pyrethro, a natural substance extracted from a plant used for centuries as a natural repellent against mosquito bites.

Pyrethrum is derived from the dried and shredded flowers of a particular species of chrysanthemum, and what makes it toxic to mosquitoes is its ability to attach to the cells of their nervous system and paralyze it upon contact. In lower concentrations, this substance does not kill mosquitoes but prevents them from getting close enough to bite.

(Read: Mosquitoes: The Best Repellents To Keep Them Out In An Eco-Friendly Way)

The team from Duke University (North Carolina) that conducted the study carried out numerous tests to understand how mosquitoes recognize and avoid pyrethrum, and which chemical components of the substance help insects do so. First, they provided some volunteers with a special rubber glove and put their hand in a cage with 50 hungry mosquitoes.

The glove had a section on the back of the hand consisting of two rather large mesh sheets, one of which - the one in contact with the skin - had been treated with pyrethrum. Normally, mosquitoes find the warmth and smell of human skin irresistible and are prone to pounce on the succulent feast, but by smelling the pyrethrum they have lost interest.

These first experiments confirm that mosquitoes do not necessarily have to touch or taste pyrethrum to perceive its presence and danger - as long as they smell it. 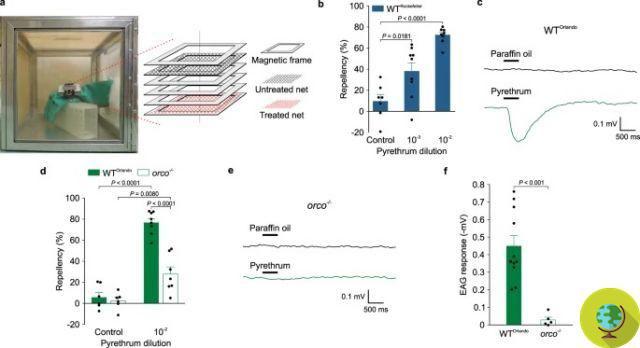