Dirac equation: does the formula of love really exist?

Do you know the Dirac equation? It is the so-called equation of love, defined as one of the most beautiful in the history of physics.

Do you know the Dirac equation? It is the so-called equation of love, defined as one of the most beautiful in the history of physics, because behind those symbols there would be a profound message. Yet there are those who bet: it is wrong.


In 1928, Paul Dirac (then Nobel Prize in Physics in '33) still a student of St John's college in Cambridge formulated his equation made up of symbols and numbers:

What do they mean? We will not make a long treatise of him and probably hardly understandable to most, let's say that the concept contained in his equation is that:

"If two systems interact with each other for a certain period of time and then are separated, they can no longer be described as two distinct systems, but become a single system."

This formula explains the phenomenon of quantum entanglement which in a certain sense can be interpreted as what happens in love. When two people know and love each other, they become one.

But why would the equation of love be wrong?

According to the scientists, we must start from the formula, which is incorrect. The right one would be this:

Where mass (m) has a negative sign, the derivative (∂) is cut off and an imaginary quantity (i) must be added as the first term. Each single symbol has a very specific meaning, and it is this that allowed Dirac to enclose a system of four equations in a single formula.

In practice, thus, the equation explains how the behaviors behave microscopic particles like electrons when they travel close to the speed of light, introducing both the electron's spin and its magnetism at the same time. 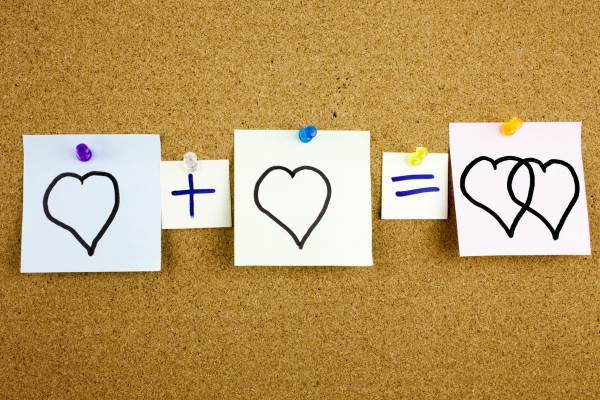 The second mistake is that quantum entanglement only makes sense for microscopic systems. If a zero-charged particle decays producing two particles of opposite charge, each of the two particles has no determined charge until someone measures it, therefore it is impossible to first determine the influence of one on the other.

Returning to the equation of love, two people who love each other represent a macroscopic system and therefore Dirac's concept of quantum inseparability cannot be applied to them. In addition, the equation is valid only for a particle that is free to move in intergalactic space and that does not interact with other fields or particles.

In short, even if scientists dismantle the theory of love behind an equation, there are those who continue to want to believe in it and basically we know, in love everything is allowed.

Acid-base balance in the human body: how acidic is your pH? ❯

add a comment of Dirac equation: does the formula of love really exist?