Diet: better low in fat or low in sugar? And how much does DNA affect? 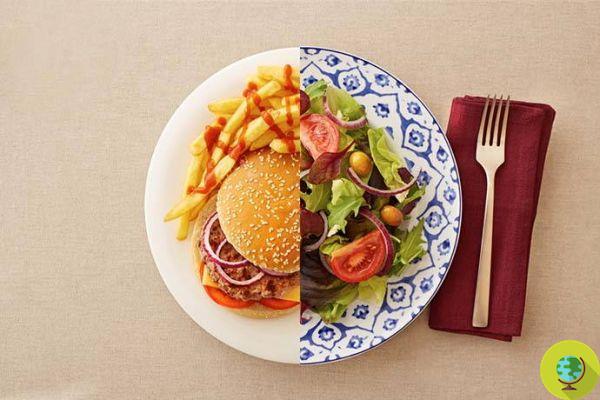 Is the best diet to lose weight low carb or low fat? The answer in a study that also investigated the genetic and insulin role in the success of one diet rather than another

Is the best diet to lose weight low carb or low fat? The answer in a study that also investigated the genetic and insulin role in the success of one diet rather than another


They are very fashionable low carb diets and those low-fat, i.e. low in carbohydrates or fats, respectively. But is there a better solution between the two to ensure weight loss? A study wanted to investigate this question. Here's what the researchers found.

Between the low-fat and low-carbohydrate diets there is basically a balance in terms of effectiveness. According to a research team at Stanford who found that cutting carbohydrates or fat eliminates excess weight in exactly the same proportion.

The study also investigated whether insulin levels or certain genes closely related to metabolism could predict the success of one diet over another for individuals. The answer, in both cases, was no.

Previous research has shown that a number of factors, including genetics, insulin levels, and the microbiome, can influence weight loss in some way. The new study, published in JAMA, focused specifically on genetics and the role of insulin to try to find out whether these variables somehow encouraged an individual's body to promote weight loss or not by following a low-fat diet. carbohydrates or a low-fat diet instead.

To do this, the research team recruited 609 participants between the ages of 18 and 50, half men and half women divided into two groups: one encouraged to follow a low-carbohydrate diet and the other a low-carb diet. fat. Each group was specified to keep their diet for one year (a part of the sample, due to external circumstances, however, had to abandon the diet before the end of the year).

As stated by Christopher Gardner, PhD, physician and lead author of the study:

“We made sure to tell everyone, regardless of their diet, to go to the farmers at the market and not buy processed food. Furthermore, we advised to follow a diet that did not make them feel hungry, otherwise it is difficult to maintain it for the long term. We wanted them to choose a low-fat or low-carbohydrate diet that they could potentially follow forever, rather than a diet that they would abandon when the study was finished. "

The individuals sampled also participated in two pre-study activities, one involving the sequencing of their genome which allowed scientists to search for specific gene patterns associated with the production of proteins that modify carbohydrate or fat metabolism; the other was a basic insulin test in which participants were given glucose on an empty stomach to then measure insulin in the body.

Over the 12-month period, the researchers tracked the participants' progress, recording information on weight, body composition, baseline insulin levels, and how many grams of fat or carbohydrates they consumed daily. By the end of the study, people in the two groups had lost, on average, 13 pounds. There was however immense variability in weight loss between them but contrary to the study hypotheses, Gardner noted that the weight loss that occurred had almost nothing to do with the genetic pattern of the individual and not even with the diet they had. following.

Perhaps the most important thing highlighted by this study is that the fundamental strategy for losing weight by limiting carbohydrates or fats is similar: you must eat less sugar, less refined flour, favoring whole grains and consuming as many vegetables as possible.

The team will continue to study the topic with the aim of finding the key to individual weight loss. As Gardner stated:

“We've all heard stories from a friend who went on a diet that worked great and then from another friend who tried the same diet and it didn't work at all. It is because we are all very different and we are just starting to understand the reasons for this diversity. Maybe we shouldn't ask ourselves what is the best diet, but what is the best diet for whom "

Fasting mimicking diet, does it really work? The results of the research ❯

add a comment of Diet: better low in fat or low in sugar? And how much does DNA affect?