Diet and fasting to fight inflammation 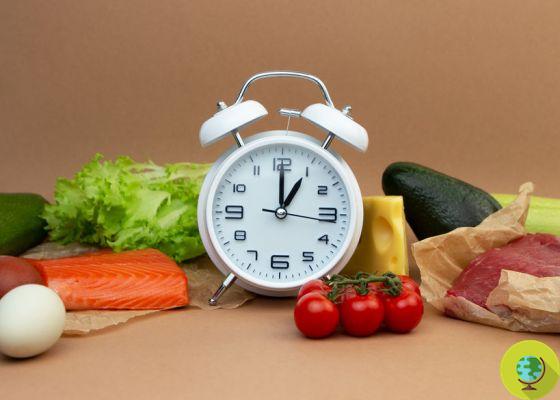 Fasting against inflammation: this seems to be the most effective method to prevent and fight inflammatory states associated with various conditions and pathologies


Fasting against inflammation. It seems this is the most effective method to prevent and fight inflammatory states associated with various conditions and diseases such as atherosclerosis, type 2 diabetes and various autoimmune diseases, including neuro-degenerative diseases.

To confirm the benefits of a real "therapeutic fasting”Are the American researchers of the Yale School of Medicine than in one studyhave found that a substance produced by the body while on a diet or fasting can block a part of the immune system involved in inflammation.

In short, reducing calorie intake is critically important in preventing many of the diseases associated with aging and a sedentary lifestyle, since eating less and even fasting (for certain periods, of course) activate the production of a molecule capable of extinguishing chronic inflammation.

Under observation is the β-hydrossibutyrrate (BHB) . which seems to be able to inhibit NLRP3 which in turn is part of a complex set of proteins that drive the inflammatory response in many pathologies, including several autoimmune diseases. BHB is a metabolite produced in response to a fasting state, high intensity exercise, reduced calorie intake, or the practice of a ketogenic diet (low in carbohydrates and high in protein and lipids).

From the experiments, it turned out that with theincrease in the level of BHB in the blood, the level of inflammation is reduced both in the case of a diet and in the case of a fast. A good result, therefore, which suggests that in the future a therapeutic fast can be used in early treatment of many diseases which share an increased production of molecules capable of triggering the inflammatory response.

All fasting then? Not really. In fact, it is true that, on the other hand, there may be other risks to health. In short, fasting, capable of making our organism more alert and strong, must however always be programmed for a limited time and assisted by specialists.

Fasting: strengthens the immune system and makes you live better and longer

10 natural methods to detoxify the body

10 foods and tips to strengthen the immune system

add a comment of Diet and fasting to fight inflammation