Did you just forget what you were going to say? It's normal? 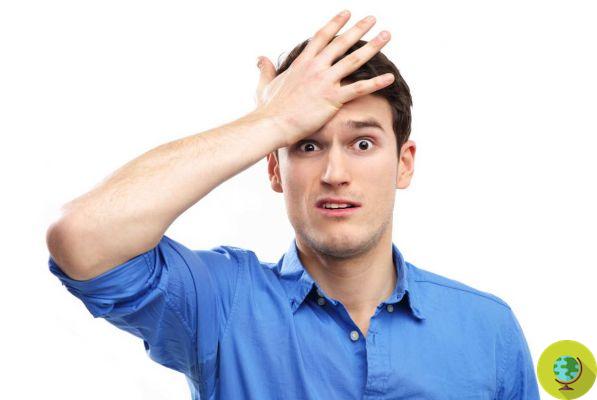 Everybody happens to be about to say something and forget it for a moment before opening their mouths. But why does this happen to our brain? Is this a worrying phenomenon or can we rest assured?

We are in the middle of a conversation between friends, we interrupt others to tell something but, just when we open our mouths, we realize we have forgotten what we meant. It often happens that we forget what we were about to say as we are suddenly interrupted - news on the news caught our attention, the phone started ringing, our son called us to show us his drawing - but, even in the apparent absence of a new stimulus, it may happen that you lose the thread of your speech and remain ... speechless.


But why does this happen? And most importantly, do we need to worry? A study conducted a few years ago by researchers at the University of California San Diego tried to solve the puzzle and to distinguish the symptoms of more serious degenerative diseases (such as Alzheimer's or dementia) from mild defaiances that can occur - especially if we are very stressed or tired. According to the study, a sudden stimulus (like the ringing of the phone) attracts the attention of our mind and interrupts the flow of thoughts - making us forget what we were saying or what we intended to say.

When we get distracted, our brain activates a group of neurons called the subthalamic nucleus (STN), which serve to interrupt the action we were carrying out. This is an innate reflex mechanism that is very useful in many everyday situations - such as when we are about to get out of an elevator and suddenly we see that there is another person standing right on the other side of the road. doors, or when we get stuck while crossing the street if we see a bicycle coming out of the corner. In practice, faced with a sudden or dangerous situation, we are able to stop ourselves without thinking about it too much.

The study analyzed the functioning of the STN in some healthy subjects, through the application of electrodes: the volunteers were asked to keep in mind a series of letters and then words. During the exercise, the participants were distracted by a sudden sound that, on a nervous level, activated the STN - effectively invalidating the success of the memorization exercise.

Hence, the unexpected event would block us in what we are doing, and it also seems to be responsible for the interruption of our thoughts and their conversion into words. According to the researchers, the loss of train of thought as a result of an unexpected event is one consequence of the evolution of our brain - a way to "clear the mind" and focus one hundred percent on the new stimulus.

It must also be said, however, that our memory is strictly dependent on the context in which we find ourselves: in practice, it is much easier to remember information or recall experiences in the place and in the situation in which they were learned or lived. To get back to what we were saying before we were interrupted, we can put ourselves back in the position we were in before the interruption or try to remember what we were doing or what the topic of discussion was. Retracing the path that led us to the thought that we have no longer expressed can lead us to remember it.

Do you really have fantasy? Your eyes tell you! In the pupils the signal that reveals if you have visual imagination ❯

add a comment of Did you just forget what you were going to say? It's normal?