A bevanda probiotics could help us in the future fight antibiotic resistance, making the bacteria susceptible to treatment with the antibiotics we have available.


La antibiotic resistance in bacteria it is an increasingly urgent problem that represents one of the main global challenges for public health.

The increase in resistance by microorganisms is due to the increasing use of antimicrobial agents, combined with ability of bacteria to adapt and evolve. Once this resistance is established, it is very difficult to get rid of it, and this necessitates the development of increasingly potent antibiotics.

Plasmids are DNA fragments present in the cytoplasm of bacterial cells. These small molecules contain genetic information, including the resistance of bacteria to antibiotics and they are capable of replicating and spreading, carrying with them the genes that determine antibiotic resistance.

“We were able to show that if you can stop the replication of the plasmid, most bacteria lose the plasmid as the bacteria grow and divide.
This means that infections that are difficult to control, even with the strongest antibiotics available, are more likely to be treatable with standard antibiotics. Explained Professor Christopher Thomas, who led the research.

The microorganisms containing the pCURE plasmid were inserted into a drink that has the task of transporting the modified plasmids in the intestine.
The assumption of the bevanda probiotics it could thus counteract the antibiotic resistance of many bacteria including E. coli, Salmonella and Klebsiella pneumoniae. 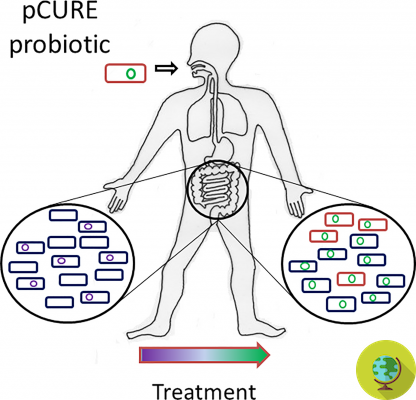 In laboratory tests the probiotic drink has been shown to be effective but further modifications and improvements of the pCURE plasmids are needed before it can move on to a first clinical study.

“The results are promising. Antibiotic resistance is one of the greatest medical challenges of our time. We need to tackle the problem on several fronts, including by reducing our use of antibiotics and looking for new, more effective drugs.
Our approach, which addresses one of the causes of antimicrobial resistance at the genetic level, could be an important new weapon in this battle, ”concluded Professor Thomas.

The study was published in the journal Plosone

Are month of birth and illnesses linked? Risks month by month ❯