Dementia: the way you sleep after age 50 can increase your risk by 30% 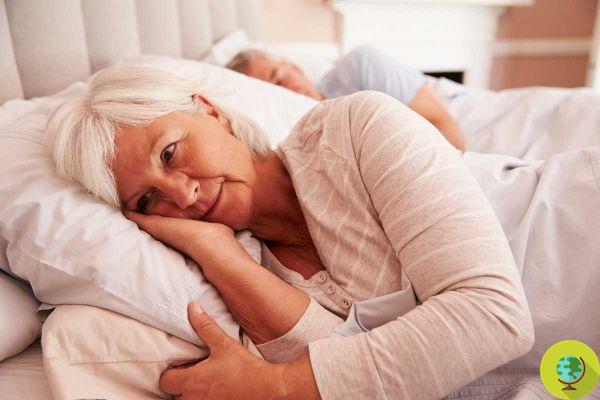 According to new research, senile dementia could be related to the way we sleep, which would increase the risk by 30%.

The first symptoms of dementia may be subtle and very vague, but when they become evident it is often too late.


Dementia refers to a group of symptoms associated with the brain decline. The most common cause is the Alzheimer's disease, a brain disorder that slowly destroys memory and thinking skills. More generally, the other symptoms can be:

Uno study he explored some habits in middle age, and how these could increase the early onset of the condition. The study examined how i Early life sleep patterns can influence the onset of dementia even decades later.

The researchers looked at data from nearly 8.000 people in the UK starting at the age of 50. Participants were evaluated based on a wide variety of measures including asked on six occasions, between 1985 and 2016, how many hours they slept a night. To assess the accuracy of this self-reporting, some of the participants wore accelerometers to objectively measure sleep time.

Over the course of the study, 521 participants were diagnosed with dementia, at a mean age of 77 years. The results showed that people between the ages of 50 and 60 who slept for six hours or less were most at risk of developing dementia later in life.

In fact, compared to those who normally sleep about seven hours, the people who get less rest each night are 30% more likely to develop dementia. Both insufficient sleep and longer-than-average sleep have been linked to a higher likelihood of developing the condition.

However, it has been difficult to determine whether these sleep changes contribute to the disease, or simply trigger early symptoms. Regular sleep regimes, eating and diet plans, exercise, and exposure to bright light in the morning are all ways to improve the quality of sleep. However, more research is needed to indicate whether or not these activities have an obvious effect on dementia risk or disease progression.

add a comment of Dementia: the way you sleep after age 50 can increase your risk by 30%