Dark chocolate: useful for the heart thanks to the bacterial flora 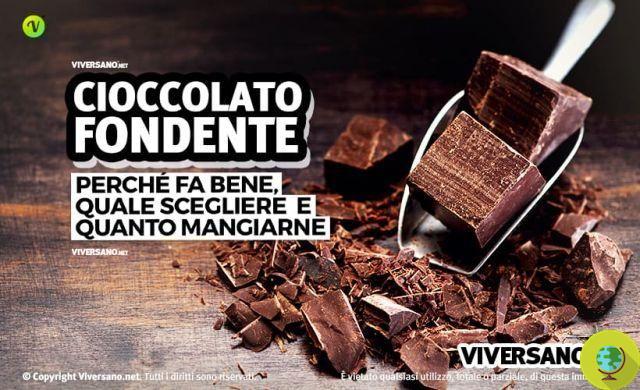 New confirmation that dark chocolate is good, this time for the heart!

A new, yet another confirmation, that dark chocolate is good for your health, also to that of the heart, comes from the research presented at the national conference of the American Chemical Society in Dallas. Where do these benefits come from? Fromanti-inflammatory effect that chocolate would once arrive in the intestine thanks to the presence of bacterial flora.


Our intestine is populated by several bacterial strains, some considered "Good" and other "bad guys". The former are particularly useful for our well-being (and not only for the intestinal one), now the new study conducted by researchers at Louisiana State University, has noted how these bacteria are able to ferment chocolate by creating anti-inflammatory substances useful in particular to the heart.

Among the good microbes in question is the Bifidobacterium who appreciates chocolate and once worked inside the intestine creates substances that, as stated by John Finley, head of the research: "when absorbed by the body, they relieve inflammation of the cardiovascular tissue, reducing in the long term the risk of stroke ".

The research was carried out using the reproduction of a human digestive system and testing 3 different cocoa powders. The part of fibers and other non-digestible compounds (such as polyphenolic polymers including catechin and epicatechin) are fermented by the intestinal flora and the researchers in particular have discovered that: "the larger polyphenolic polymers are metabolized into smaller molecules, which are absorbed more easily. These smaller polymers exert an anti-inflammatory activity ".

Useful, according to Finley, would be associate prebiotics with the fibers present in cocoa, substances that favor the growth of good "bacterial" strains already present in our intestine. This would help the polyphenolic compounds to transform into compounds with antioxidant action and would help health more in general. Among the substances useful for this process Finley mentions raw garlic, whole wheat flour, pomegranate and Acai berries.

- Chocolate is an ally of the heart and the circulatory system, according to science

Chocolate: ally of the teeth. It prevents tooth decay and plaque naturally ❯

add a comment of Dark chocolate: useful for the heart thanks to the bacterial flora