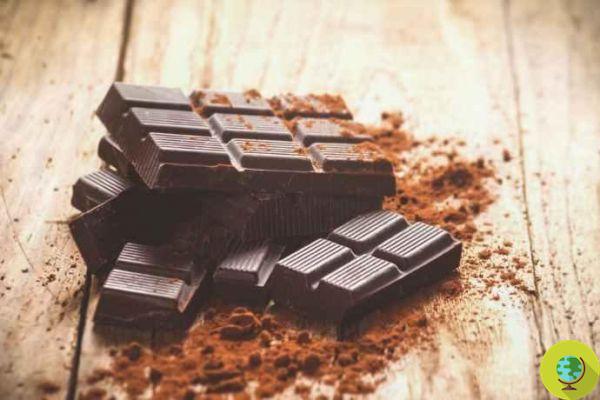 Eating dark chocolate with at least 70% cocoa and 30% brown sugar has positive effects on stress and moods in general.

Chocolate what a passion! Eating dark chocolate with at least 70% cocoa and 30% brown sugar has positive effects on stress and moods in general, but also on concentration, memory and inflammation.


This is confirmed by researchers at Loma Linda University, in California, who have studied the effect of cocoa on cognitive, endocrine and cardiovascular health. The results of their work were presented at Experimental Biology in San Diego: while cocoa is known to be a major source of flavonoids, this is the first time its effects have been studied on human subjects to determine how it can support cognitive, endocrine and cardiovascular health.

Already established that it is good for brain health and improves circulation, especially chocolate melting, returns to the headlines for its thousand benefits. This time especially as regards the percentages of cocoa.

"For years we have been examining the influence of dark chocolate on neurological functions from the perspective of sugar content," said Lee S. Berk, professor and researcher in psychoneuroimmunology and food science. The higher the cocoa concentration, the greater the positive impact on cognitive activities, memory, mood, the immune system ".

American scholars have reached these conclusions by examining, through two specific analyzes, the action of cocoa on immune responses and on the genes involved in sensory perception, developing what is called cerebral "hyper-plasticity", that is the capacity that allows the brain to modify the structure in relation to the activity of their neurons). Thus, according to the results, dark chocolate is also capable of improving cognitive processing, learning ability and memory.

In small quantities, then, green light for chocolate! It will not only relax your mind, but it will also make you happier.

Cracked watermelon is not harmful! The buffalo on watermelons that feeds food waste ❯