According to recent research, it is possible for obese people to maintain weight loss through the combination of multiple factors

According to recent research, it is possible for obese people to maintain weight loss through the combination of multiple factors


Worldwide, nearly 40% are overweight and 13% live withobesity, a condition associated with an increased risk of premature death, as well as diseases such as 2 type diabetes, cardiovascular diseases, cancer e infertility.

But that's not all, because even weight recovery after an initial weight loss is an important and unsolved problem. Until now, there were no well-documented studies available on what the best treatment method to maintain healthy weight loss. But researchers from the University of Copenhagen have completed one study sensational published in The New England Journal testing four different types of treatment following diet-induced weight loss, the research team demonstrated for the first time how it is possible for people with obesity maintain long-term weight loss.

Specifically, a highly effective treatment was identified after diet-induced weight loss, combining moderate to vigorous exercise along with appetite-inhibiting obesity medications. It was also found that appetite increases at the same time as energy consumption decreases and this contrasts with the maintenance of weight loss; there's a hormone that stimulates appetite, which increases dramatically as we lose weight and, at the same time, the level of appetite suppressing hormones drops dramatically. In addition, a weight loss can also result in loss of muscle mass.

The study involved obese participants who played very little sport; they initially followed a low-calorie diet for eight weeks, during which time they lost about 13 kg each, which resulted in significant improvements in their health with a drop in blood sugar and blood pressure. 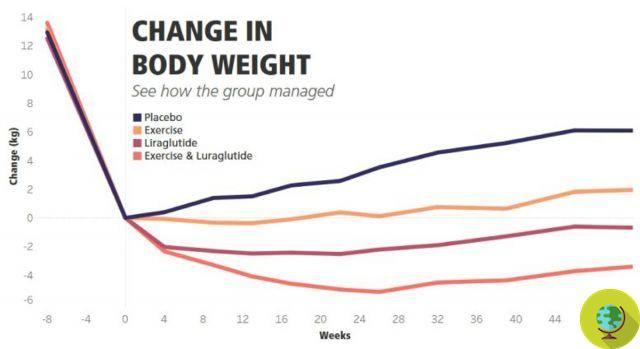 @The New England Journal of Medicine

The participants were then randomly divided into four groups: two groups received placebo medications, while the other two groups received obesity medications. Between the two placebo groups, one group followed an exercise program of at least 150 minutes of moderate-intensity physical activity or 75 minutes of vigorous intensity during the week, while the other group maintained the low level of activity. The two groups that received obesity drugs were divided equally.

All study participants were weighed monthly, and received nutritional and dietary counseling focused on healthy weight loss. After one year, the exercise-only group and the obesity-only drug group maintained their weight loss of 13 kg. The placebo group regained half the weight, with all risk factors deteriorating.

The most notable improvements occurred in the combined group, who followed the exercise program and received obesity medications; therefore, the researchers observed in this group a 'further weight loss of about 16 kg in one year.

The two groups that trained increased their fitness ratings: they lost fat mass and gained muscle mass. This could indicate healthier weight loss than someone who only loses fat without increasing lean mass level.

So, the Weight loss can be maintained with exercise of approximately 115 minutes per week performed mainly at vigorous intensity, such as cycling or running. Plus, when you combine physical activity with obesity medications, the effect is double. With this study, the researchers hope that people with obesity can maintain weight loss through a structured treatment plan, which includes diet, physical activity and specific medications, all accompanied by ongoing medical follow-ups.

Sull 'obesity could it be interesting for you: