Cystitis: how to prevent it with natural supplements 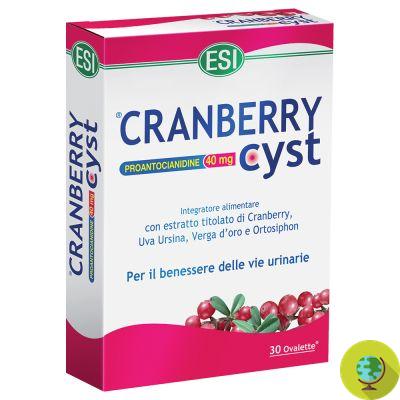 Cystitis: how can it be prevented? If you suffer from it cyclically, it is good to know that many natural remedies can be effective, but adequate nutrition could also help you fight this annoying infection both in its acute phase and in the prevention phase. But what is cystitis, what are the symptoms and which supplements to take to prevent it?

Cystitis: how can it be prevented? If you suffer from it cyclically, it is good to know that many can be effective natural remedies, but also aadequate nutrition could help you fight this annoying infection both in its acute phase and in its prevention phase. But what is cystitis what are the symptoms e which supplements to take to prevent it?

Cystitis is a 'urinary tract infection usually due to a bacterial infection of the bladder. It mainly affects women (in a very low percentage men) and it is irritating e painful, characterized as it is above all by a strong burning and the constant feeling of having to urinate.

The most common symptoms of cystitis:

How to prevent cystitis

If you know that you have cystitis, you can prevent it with some simple ones precautions, such as drinking plenty of plain water, not holding your urine for a long time, not wearing pants that are too tight, not abusing intimate cleansers that can alter the pH and lower the body's defenses, avoiding the use of external absorbents as much as possible and maintain regular bowel activity.

Also 'supply, we said, can come to the rescue. Eating lots of vegetables, for example, those rich in water such as salads or cucumbers, can be very useful. Or whole grains which, unlike refined ones, do not contribute to raising inflammation in our body.

What supplements to take to prevent cystitis?

There are also several supplements which can perform the tiring task of preventing such a troublesome pathology as cystitis.

Some are based on blueberry e prebiotics and are indicated in the case of acute or recurrent infections. It has in fact been shown that cranberry is a powerful antibacterial which contains several substances (including flavonoids, anthocyanosides, citric acid and malic acid) capable of carrying out an antibacterial action and regulator of the urine pH. As well as i prebiotics they are able to support metabolism, improve the absorption of mineral salts and the use of vitamins and promote the activity of the immune system.

Other supplements contain only cranberries which regulate the normal activity and functionality of the urinary tract and are mostly indicated in the case of frequent cystitis. In short, reducing the risk of urinary infections and preventing cystitis can and is also possible with food supplements that can help, and a lot, to avoid resorting to the most harmful antibiotics.

Cystitis: the most common symptoms ❯

add a comment of Cystitis: how to prevent it with natural supplements