Cupping: what it is, benefits and CONTRAINDICATIONS

Cupping (or cupping) is a technique of very ancient origins traditionally used by traditional Chinese medicine but now increasingly widespread also in the West and especially appreciated by those who practice sports. But exactly what is it for and what are the contraindications of this treatment?

La cupping (or cupping) it is a technique of very ancient origins traditionally used by traditional Chinese medicine but now more and more widespread also in the West and appreciated above all by those who practice sports. But exactly what is it for and what are the contraindications of this treatment?


Cupping takes its name from the main tool it uses, that is small cups (which can be made of glass, bamboo, ceramic or plastic) that must be applied with care on some parts of the body acting as a suction cup in order to stimulate blood and lymphatic circulation, help eliminate toxin stagnation and thus restore vital energy to the body.

WHAT IS THE CUP

Already in the second century AD mention is made of the technique of cupping as a useful system a reactivate body fluids with a beneficial effect for the body. It will be Chinese doctors in particular who will breathe new life into this body's healing system acts on some reflex areas (often the same ones used in acupuncture) to stimulate harmony and balance within the different organs and tissues.

Read also: ACUPUNCTURE: 10 POSSIBLE APPLICATIONS
The technique consists in'' apply cups with a size of about 5 centimeters for a variable time (generally 5 10-minute but in any case no more than 20) on areas of the body devoid of hair and without any excoriation. The cups can be fixed in a certain point or have the possibility of sliding over larger areas. To make the cups adhere to the body (suction cup type) first they warm up inserting a small flame inside in such a way as to burn the oxygen, create a vacuum inside and thus give the cup thesuction effect. In this process, heat is an integral part of the technique without which the desired benefits cannot be obtained. In this case we speak of hot cupping.

There is also a cold cupping, a modern version of the traditional technique in which the presence of some valves is exploited to ensure the suction effect and of which the intensity of the suction can also be adjusted according to needs.

Cupping can be used in different situations. Sportsmen (remember, for example, the obvious signs of Michael Phelps at the Rio Olympics) appreciate it above all as being able to relieve various types of pain, especially muscle pain due to excessive effort and fatigue. It is a technique recommended by traditional Chinese medicine to treat painful symptoms originating from cold, humidity or due to traumatic events. The principle it uses is to draw blood in the area where the cup is positioned and therefore improve circulation at strategic points. 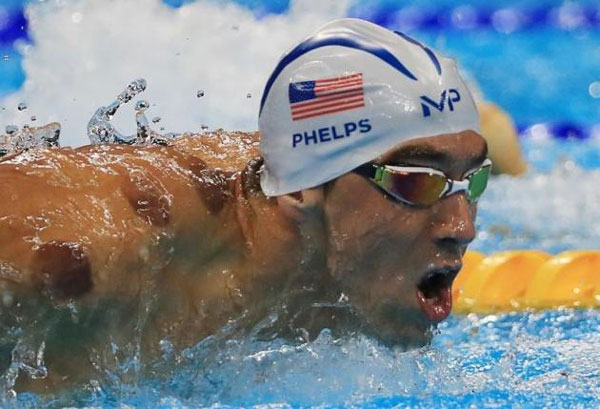 But this is not the only advantage it offers: it can be useful in case of problems with the respiratory system such as cough, bronchitis or asthma but also to treat gynecological disorders and problems of the nervous system. Good results are obtained for example in case di anxiety, depression or insomnia.

Since cupping moves the body's fluids, cupping can also be used in cellulite treatment and more and more spas and wellness centers include it among the techniques available to their customers, often followed by a massage.

Of course, depending on the problem you intend to solve, the cups will be wisely positioned in different parts of the body. It is therefore evident how important it is, in case you want to experiment with this system, contact specialized personnel.

Though this technique has no scientific basis, people who have tried it find several benefits especially in the treatment of painful conditions.

Cupping has some contraindications. It is not recommended in case of asthenia, chronic diseases that create fatigue, blood disorders, loose skin or dermatosis, and in special conditions such as pregnancy. As for the side effects, the only thing to note is that, immediately after the treatment, they tend to form on the areas of the skin where the cups have been applied. purple-red spots but they disappear in a few days.

add a comment of Cupping: what it is, benefits and CONTRAINDICATIONS