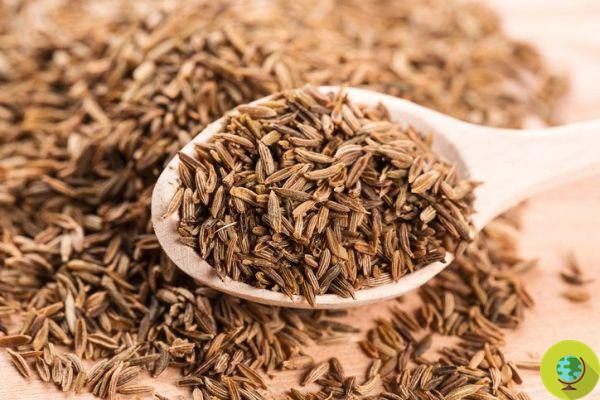 Cumin seeds are derived from the homonymous plant (the corresponding Latin name is Cuminum cyminum) belonging to the Apiaceae family, native to the Eastern Mediterranean area and India. They are obtained from its fruits after drying and are used in the food tradition typical of different cultures, both in the form of whole seeds and ground spice.

Cumin, a spice with many properties. THE cumin seeds they are derived from the homonymous plant (the corresponding Latin name is Cuminum cyminum) belonging to the Apiaceae family, native to the Eastern Mediterranean area and India. They are obtained from its fruits after drying and are used in the food tradition typical of different cultures, both in the form of whole seeds that of ground spice.

These seeds have an elongated shape and are brown in color with golden hues. There cumin cultivation it requires very high temperatures and occurs for the most part in areas such as India, Iran, Turkey, Syria, Egypt, Mexico and Chile. Real cumin should not be confused with "caraway", or "caraway". Their appearance is similar, but their flavors are very different.

Cumin is considered to be a particularly iron-rich spice. Its health benefits have been considered since ancient times sinceAyurveda, traditional Indian medicine, which has attributed properties to cumin that nowadays are beginning to find confirmation in scientific research.

Regarding cumin it is possible to find numerous scientific studies, who took care to verify the beneficial properties of application in case of diabetes, in the reduction of cholesterol and triglycerides, for the improvement of immune response and in countering osteoporosis.

Cumin has also been attributed a high content of antioxidants, the presence of which would last longer in whole seeds, rather than in crushed or ground cumin, which should be stored in the refrigerator for this purpose. Cumin can be counted among the foods to be used for natural detoxification of the organism, along with other spices useful in this regard, such as ginger, cinnamon, fennel seeds, turmeric and black pepper.

Cumin helps to help the body absorb nutrients, improves digestion e stimulates the immune system. Its essential oil is considered beneficial in fighting respiratory ailments. Cumin is attributed with anti-inflammatory properties, which motivated its traditional use to relieve stomach problems and skin irritations.

Cumin seeds have been considered a spice since heating power, suitable for use during the winter season. The consumption of cumin seeds is considered useful for counteracting abdominal swelling. Finally, cumin has been recognized as calming and sedative properties.

In India, cumin has been part of the preparation of many spice-based dishes and condiments for millennia, such as curry and masala. Through our site it is possible to consult an interesting one prescription is preferably used for homemade curry preparation, which involves the use of various spices, including cumin. It is used in the preparation of soups and aromatic sauces. Cumin seeds are mainly used as a spice and as a condiment in the cuisines of South Asia, Latin America and North Africa.

In order to be used as a seasoning on vegetables, cumin seeds can be lightly toasted in a pan in olive oil, in order to enhance its aroma. A simple condiment based on cumin seeds can be prepared by pounding them together with coarse salt and mixing everything with lemon juice.

In cosmetics cumin is used as a flavoring in the preparation of detergents, toothpastes and mouthwashes. It can also be present in the formulation of stimulating massage oils. In herbalist's shop cumin seeds are used for the preparation of essential oils, mother tinctures and herbal teas. Cumin-based herbal extracts can be used in order to improve digestion and to promote the elimination of intestinal gas.

Spices: 7 do-it-yourself mixes from the world to give more flavor to our dishes

10 natural methods to detoxify the body

Black cumin: the extraordinary properties and how to use the 'blessed seed' ❯

add a comment of Cumin: uses and fantastic properties