Crocs slippers? They cause tendonitis and hurt feet 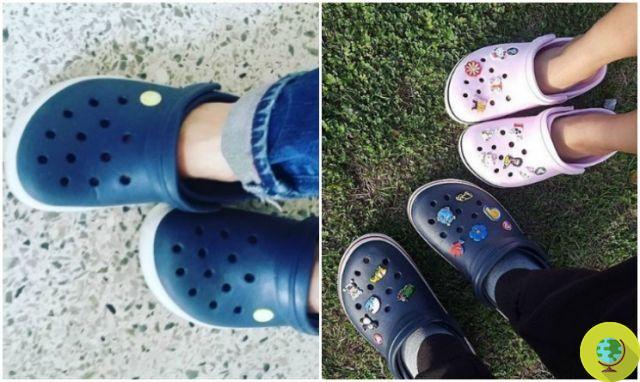 Crocs can lead to tendonitis, worsen foot malformations, and cause nail problems, as well as corns and calluses. This is why podiatrists would recommend only sporadic use.

Colorful, light and very famous, but ... they hurt your feet! The Crocs, famous ciabattone made of rubber that half the world (including VIPs) wears, would damage the lower limbs.


To say it is a series of podiatrists, ready to swear that Crocs can lead to tendonitis, worsen any malformations of the feet and cause nail problems, as well as corns and calluses. This is why they would only recommend one sporadic use.

Whether it's your taste or not, the multi-colored slut started to become popular in 2002. Since then, Mr. Crocs has had sales of more than 300 million shoes sold in 90 countries. To date, many consider the Crocs shoes suitable more than anything else for people with walking problems, but, on the other hand, the flower of famous people continue to proudly show them off.

Now, however, some American podiatrists have issued not-so-encouraging messages. Megan Leahy, for example, a podiatrist in Chicago at the Illinois Bone and Joint Institute, said that she is not good for wearing Crocs every day and that this type of shoe does not secure the heel well. On the contrary, heel instability would lead to poor toe position, inflammation of the tendons, worsening of foot malformations and nail problems, corns and calluses. “The same thing that - continues Leahy - she would also happen to wear a pair of flip-flops all the time”.

READ also: THONG SLIPPERS: 10 REASONS NOT TO USE THEM ACCORDING TO AMERICAN PODOLOGISTS

Even Dr. Alex Kor, President of the American Academy of his Sports Medicine Podiatric, states that heel diseases are the main consequences of regular Crocs users. Despite this, Kor is quick to argue that there are many people who can benefit from the Crocs themselves: this is the case for those who have a high arch or suffer from edema in the legs and ankles.

Basically, Crocs shoes are suitable for short periods of time, they should not be worn for long walks and shouldn't be worn for 8-10 hours a day.

And what do you think of the Crocs?

add a comment of Crocs slippers? They cause tendonitis and hurt feet