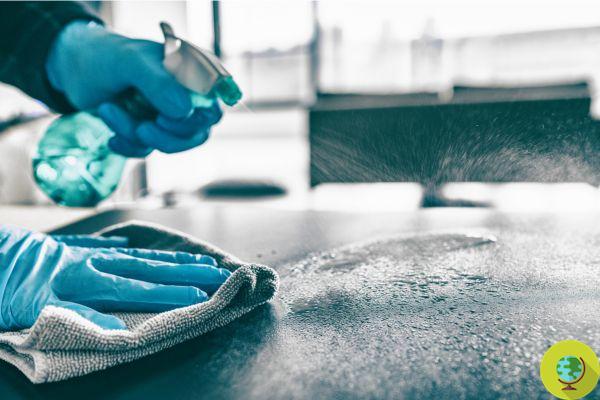 In Hong Kong, they have developed a disinfectant that could eliminate traces of coronavirus from surfaces for 90 days.

A disinfectant that eliminates traces of coronavirus from surfaces for 90 days. Hong Kong researchers have developed a kind of antiviral microfilm that would prevent the virus that causes Covid-19 from surviving.


This is what emerges from a study conducted at the University of Science and Technology in Hong Kong, where in reality a coating, called MAP-1, had already been worked on for a decade, which could be sprayed on the surfaces most frequently used by the public, such as and handrails or elevator buttons.

"These points are often touched upon and, at the same time, they are a very effective means of transmitting disease," Professor Joseph Kwan, HKUST coordinator and one of the lead researchers on the team that developed the product, told Reuters.

The new disinfectant creates a kind of invisible, non-toxic anti-microbe barrier and can be used on a variety of materials, including glass, metal, plastic, leather and various fabrics. Thanks to its formulation, it remains on the treated surfaces for a long time, guaranteeing extended protection up to about 90 days from the first application.

The coating that forms after spraying has millions of nano-capsules containing disinfectants, which Kwan says remain effective in killing bacteria, viruses and spores even after it dries. Unlike common disinfection methods such as diluted bleach or alcohol, MAP-1 is further enhanced by heat sensitive polymers that encapsulate and release disinfectants upon human contact. Given the success of the experimentation phase, the product - which has already been used in large spaces as well as in schools - will be distributed in the form of a spray for domestic use in Hong Kong stores starting from May, in sizes of 50ml and 200ml at cost. of 8-30 euros.