Cracked watermelon is not harmful! The buffalo on watermelons that feeds food waste 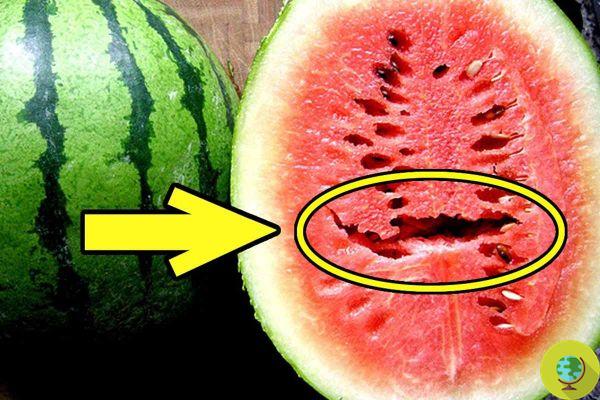 Is the watermelon that has cracks inside it dangerous and shouldn't be eaten? Absolutely no! Let's debunk this hoax that circulates every year

Summer is watermelon time but, even on this food, there is a certain misinformation. A hoax that has been around for some time has returned to circulate, the one that advises against consuming watermelons that have cracks inside. A completely unfounded news that, among other things, fuels food waste.


You may have read this news several times. But it is an alarm raised regarding the consumption of watermelon in which it warns not to eat watermelons that have holes or cracks inside them like those you see in the cover image.

There are also videos on the subject, all agreeing that watermelons with internal cracks are dangerous.

It is even advisable to throw away the fruit that has this "defect" as it would be a synthetic product (therefore not natural) and consuming it could have health consequences. These watermelons, in fact, would have been doused with harmful substances to help them grow faster.

Obviously this news is in no way founded, so much so that no one reports the opinion of any expert or, much less, a study that has found evidence to affirm that watermelons with cracks are dangerous.

Back in 2017, Butac denied the news by explaining that the crack inside the watermelons is quite natural, being caused by adverse weather conditions or poor pollination.

Explain in detail why watermelons break the Orti a tutto Gas website where you can read:

“There is a rumor that when you find a cracked watermelon inside you must throw it away, because it is dangerous, even carcinogenic! It is a buffalo: in cucurbits it is quite common to find fruits with a hollow heart. What is the cause? It is still not entirely clear why watermelons crack inside, although there are several theories. According to the most accredited, it could be a problem of incomplete pollination, for which the fruit begins to develop abnormally. We don't know if that's actually the case, but analyzes have revealed no nutritional differences between cracked and non-cracked watermelons. So if you find one or more with these characteristics, eat them lightly ".

It is evident that a hoax of this type does nothing but feed waste of food, in fact there is a real risk that people, reading it, actually decide to throw away the watermelon that has this small defect, not so rare.

It is useless to remind you that we must always investigate and research the sources to understand if what we read really has meaning and foundation.

In the case of watermelon with crepe no, so let's enjoy our watermelon!

Read all of our articles on watermelon.

Read all of our articles on watermelon.

The right bedroom color to sleep and ignite the passion ❯

add a comment of Cracked watermelon is not harmful! The buffalo on watermelons that feeds food waste