Coronavirus: in closed spaces it would resist in the air for 30 minutes and up to 4,5 meters. The Chinese study inside a bus

According to a new study conducted on a Chinese bus, the coronavirus can be transmitted even at a distance of 4,5 meters

Coronavirus, not one meter, but 4,5. According to a new study conducted in China on a bus, the Sars-Cov-2 virus can travel up to double the "official" safe distance and remain in the air for 30 minutes. However, we need to be cautious since it is a circumstantial study that needs further confirmation and investigation.


The new research, to be considered with due caution, would have found that a bus passenger infected fellow passengers sitting 4,5 meters away. The news was reported by the South China Morning Post website, referring to the study published by Practical Preventive Medicine.

According to research conducted by scientists from the Hunan Provincial Center for disease control and prevention, the new coronavirus can remain in the air for at least 30 minutes and travel up to 4,5 meters - beyond the "safe distance" recommended by health authorities around the world. world.

Led by a team of Chinese government epidemiologists, the study also found that the virus can survive for days on the surface where the droplets produced by our breath land, increasing the risk of transmission. The residence time on the surface depends on factors such as the temperature and the type of surface, for example at about 37 ° C, it can survive for two or three days on glass, fabric, metal, plastic or paper.

The experiment on the bus

The study was based on a case of contagion which took place on January 22nd. A passenger, known as "A", jumped aboard a fully booked intercity coach and sat in the second row in the back. The passenger was already ill but China had not yet declared the national crisis, so neither he nor the other people on board wore a mask.

Examining the security camera footage of the bus, Hu Shixiong, lead author of the study noted that Patient "A" had not interacted with others during the four-hour journey but when the bus stopped in the next city, the virus had already passed from the carrier to seven other passengers.

Among the infected there were not only people sitting next to him but also up to six rows away, about 4,5 meters. Subsequently, they tested positive, including one passenger who had however shown no symptoms of the disease. After dropping these passengers, another group boarded the bus about 30 minutes later. The infection also affected a passenger sitting in the front row on the other side of the lane. 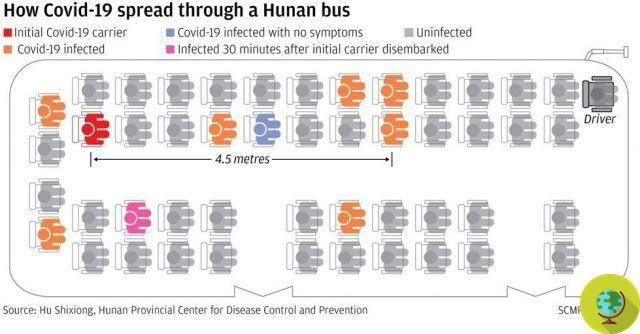 “The possible reason is that in a completely enclosed space, the flow of air is mainly driven by the warm air generated by the air conditioning. The increase in warm air can carry the virus-laden droplets to a greater distance, ”the researchers explain. It can be confirmed that in an enclosed air-conditioned environment, the transmission distance of the new coronavirus will exceed the commonly recognized safe distance ".

Scientists have warned that the coronavirus could survive more than 5 days in human feces or body fluids. This is why it is even more important not only to wash your hands well and often but also to wear masks in public places.

These conclusions they go anyway taken with pliers since it is a single research conducted on a bus and on a fairly small sample of people.

A Beijing doctor involved in diagnosing and treating Covid-19 patients said the study left some questions unanswered. For example, passengers seated immediately next to the carriers were not infected, although they experienced maximum exposure to the disease-carrying aerosols.

"Our knowledge of the transmission of this virus is still limited," he added.

In any case, if the conclusions are confirmed they will question the advice of health authorities around the world that one should remain at a "safe distance" of one to two meters.

add a comment of Coronavirus: in closed spaces it would resist in the air for 30 minutes and up to 4,5 meters. The Chinese study inside a bus