Coop Alleanza recalls clams due to the presence of Escherichia Coli

Recalled a batch of clams or lupins for Escherichia Coli beyond the legal limits. It was sold in some Coop Alleanza stores.

A new food alert, resulting in a product recall, concerns a batch of clams or lupins sold by Coop Alleanza. There is presence of Escherichia Coli beyond the legal limits.


A notice to consumers appears on the Coop website indicating the recall of a batch of New Copromo Srl clams or lupins, sold in 500-gram nets. Who consumes the offending lot, the 0035C packed on 04/02/2020, risks being faced with Escherichia Coli intoxication given that there is a presence in the products of this bacterium beyond the legal limits.

The lot was sold only in a few Coop Alleanza sales points (the largest of the consumer cooperatives of the Coop system) at the Forlì platform with ddt n. 1402 / A of 04/02/2020.

So be careful if you have bought clams and lupins in the following points of sale: 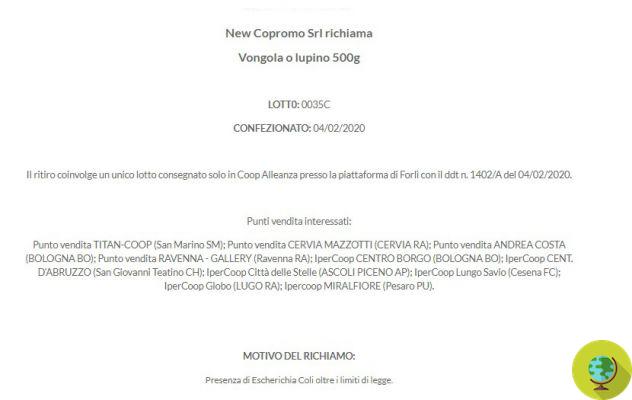 If you have purchased clams or lupins with the aforementioned lot, do not consume them but return them immediately to the store for an exchange or refund.