With the increase in the trade in red meat, the chronic diseases associated with the consumption of this food have also increased

With the increase in trade in red meat globally, chronic diseases related to the consumption of this food have also increased, according to a study that compared data from 154 countries around the world.


A study conducted by the British Medical Journal has tried to link the increase in the trade and consumption of red and processed meats with the onset of serious chronic diseases. Researchers drew on data on imports and exports of meat around the world collected by FAO to find out in which areas of the globe processed and red meat has become more available, and then focused on disease and death rates. connected to three of the most important pathologies associated with the consumption of red meat and processed meat: colorectal cancer, type 2 diabetes and coronary disease.

As it is easy to imagine, the increased consumption of red meat has caused a surge in the onset of many chronic diseases related to food. But it is not only our health that is put at risk by the consumption of red or processed meat - the environment is also severely tested by this highly developed international trade: greenhouse gas emissions, loss of biodiversity, reduction of natural habitats are all consequences of the expansion of intensive farming, but also and above all of the commercial exchanges that unite every corner of the planet (and which, among other things, have very high costs even in purely economic terms for consumers).

The study calculated a worldwide increase in deaths related to meat consumption of almost 75% between 1993 and 2018, with substantial differences between the various areas of the world: an increase of 55% is estimated in developed countries and a rate that reaches 157% higher in developing countries! This is because many developing countries tend to depend on imports of red and processed meat to meet the meat needs of the population that is growing at a dizzying rate: in fact, as the study shows, in recent years developing countries have the volume of their imports increased, while the more developed ones saw their export levels rise. 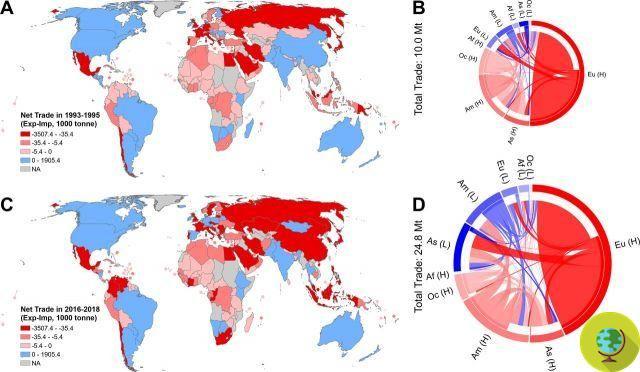 Map of the countries of the world involved in the red meat trade, showing how the turnover has grown enormously in recent decades (@BMJ)

The researchers therefore suggest to governments around the world to do more to safeguard people's health through a healthier and more sustainable diet for the planet, which increases the numbers of international trade without losing sight of the defense of nature. and man.

add a comment of Consumption of red meat increases the onset of colorectal cancers, type 2 diabetes and coronary heart disease