Coenzyme Q10: what it is, benefits, when you should take it and with what precautions 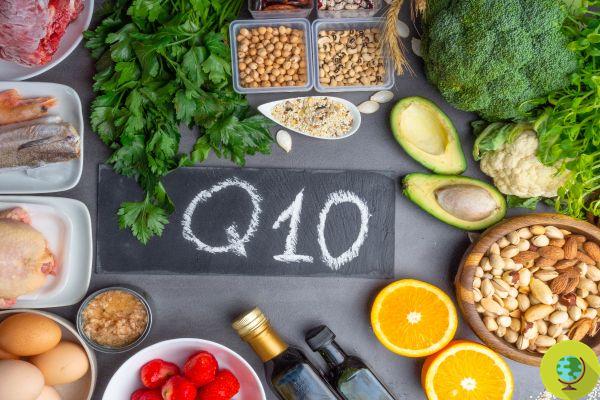 Coenzyme Q10 is an important compound for our body. Here's how, when to take it and the benefits proven by science.

Coenzyme Q10 is an important compound for our body. Here's how, when to take it and the benefits proven by science

Il CoQ10, also called ubiquinolo (the bioactive form) or ubiquinone, is a fat-soluble coenzyme found in every cell in the body. It resides in the mitochondria and its main job is help convert nutrients from food into adenosine triphosphate (ATP). CoQ10 is also a key regulator of cellular autophagy (cleansing) and rejuvenation.

Coenzyme Q10: what it is

Coenzyme Q10 is a fat-soluble compound that occurs naturally in our body, but its levels decrease as we get older; this could contribute to the development of chronic conditions and diseases. For this reason, the use of supplements, although CoQ10 can be absorbed through food, such as meat (especially offal), fish, nuts, seeds and some vegetables such as broccoli.

It is also an important one antioxidant, which means it targets and neutralizes free radicals, i.e. harmful molecules that are normal by-products of cellular activities and metabolism, or deriving fromexposure to UV rays, air pollution, cigarette smoke and pesticides. CoQ10 can also help regenerate other antioxidants, such as vitamin E and vitamin C. (Read also: Not just fish: the 5 plant sources of Omega 3)

When is the best time to take CoQ10?

At the moment there is no research, which indicates the exact time when one should take CoQ10 to obtain benefits. However, when considering how the body processes and responds to this compound, experts generally suggest the morning as the ideal time to take this supplement.

The reason? CoQ10 may have a energizing effect, and this is what makes it more suitable for the morning. Taking it early in the day can also help regulate your night's rest. But of course, everyone is different, and for some people it may be better to take it in the evening, especially if CoQ10 doesn't compromise sleep quality.

Also, taking CoQ10 supplements can interact with blood-thinning medications and blood pressure medications; consequently, it is always advisable to consult your doctor before taking any type of supplement.

What is the correct dosage?

There is no dosage valid for all, although most clinical research on CoQ10 has found the appropriate dose to be around 100 milligrams or higher.

Obviously, it is always advisable to consult your doctor who will be able to suggest the dosage and frequency of administration according to the clinical situation and the patient's needs.

The benefits of CoQ10

CoQ10 has so many benefits for the well-being of our body. Here are the 9 proven by science.

It can help treat heart failure

THEheart failure it is often a consequence of other conditions and pathologies affecting the cardiovascular system, such as coronary artery disease or hypertension.

According to one study, these conditions can lead to increased oxidative damage and inflammation of the veins and arteries. Heart failure occurs when these problems affect the heart to the point that it is unable to contract, relax, or pump blood regularly.

In a study of 420 people with heart failure, CoQ10 treatment for two years improved their symptoms and reduced their risk of dying from heart problems. Additionally, another study treated 641 people with CoQ10 or a placebo for a year. By the end of the research, those in the CoQ10-treated group had been hospitalized less frequently for worsening of heart failure and reported fewer complications.

It could help in case of infertility

La female fertility it decreases with age, due to the decrease in the number and quality of eggs available.

According to one review, CoQ10 is directly involved in this process. As we age, CoQ10 production slows down, making the body less effective at protecting the ovaries from oxidative damage. L'integration with CoQ10 seems to help and may even reverse this age-related decline in egg quality and quantity.

Likewise, male sperm is susceptible to the effects of oxidative damage, which can result in reduced sperm count, poor sperm quality and infertility. Several studies have concluded that supplementing with CoQ10 can improve sperm quality, activity and concentration by increasing sperm antioxidant protection.

La skin it is the largest organ in the body, and is widely exposed to harmful agents that contribute to aging. These agents can be internal or external; some internal damaging factors include cell damage and hormonal imbalances. External factors include environmental agents, such as UV rays.

- harmful elements they can lead to one reduced skin hydration and protection from environmental aggressors, as well as the thinning of the skin layers.

Applying CoQ10 directly to the skin can reduce damage from internal and external agents, by increasing energy production in skin cells and promoting antioxidant protection. In fact, CoQ10 applied directly to the skin has been shown to reduce oxidative damage caused by UV rays, and even to decrease the depth of wrinkles. Finally, people with low CoQ10 levels appear to be more likely to develop skin cancer.

It could reduce the headache

La mitochondrial function abnormal can lead to increased absorption of calcium by cells, excessive production of free radicals and reduced antioxidant protection. This can result in low energy in brain cells and even migraines.

Because CoQ10 lives primarily in the mitochondria of cells, it has been shown to improve mitochondrial function and help reduce the inflammation that can occur during migraines. Indeed, one study has shown that supplementing with CoQ10 is three times more likely than a placebo to reduce the number of migraines. In addition, one was observed CoQ10 deficiency in migraine sufferers.

It could improve sports performance

Lo oxidative stress it can affect muscle function and, therefore, performance during training.

CoQ10 can help exercise performance decreasing oxidative stress in cells and improving mitochondrial functions. One study highlighted the effects of CoQ10 on physical activity and those who supplemented with 1.200 mg of CoQ10 per day for 60 days showed a reduction in oxidative stress. (Read also: The 7 best supplements and vitamins most effective against stress)

It could help with diabetes

Oxidative stress can induce cell damage, which it can cause metabolic diseases such as diabetes; abnormal mitochondrial function has also been linked to insulin resistance.

CoQ10 has been shown to improve insulin sensitivity and regulate blood sugar levels. Supplementing with CoQ10 could also help increase blood CoQ10 concentrations by up to three times in people with diabetes, who typically show low levels of this compound.

Also, one study involved people with type 2 diabetes who were given a CoQ10 supplement for 12 weeks. There was a significant reduction in fasting blood sugar levels. Finally, CoQ10 could to help to prevent diabetes stimulating the breakdown of fats, e reducing the accumulation of fat cells which could lead to obesity or type 2 diabetes.

It could prevent cancer

Uno study demonstrated how oxidative stress causes damage to cells and affects their function. If your body is unable to effectively fight oxidative damage, the structure of your cells can become damaged. increasing the risk of cancer.

Low levels of CoQ10 they have been associated with up to 53,3% higher cancer risk and indicate a poor prognosis for various cancers. Additionally, one study also suggested that supplementing with CoQ10 may help reduce the chance of recurrence.

It's good for the brain

Mitochondria are the main energy generators of brain cells. There mitochondrial functionand tends to decrease with age. Total mitochondrial dysfunction can lead to brain cell death and diseases such as Alzheimer's and Parkinson's. (Read also: A short afternoon nap improves cognition and keeps Alzheimer's away)

Unfortunately, the brain is very susceptible to oxidative damage due to its high fatty acid content and high oxygen demand. This oxidative damage it increases the production of harmful compounds that could affect memory, cognition and physical functions.

CoQ10 can reduce this damage, and slow the progression of Alzheimer's and Parkinson's.

CoQ10 could protect the lungs

The lungs are the most exposed to contact with oxygen, which makes them very susceptible to oxidative damage.

The increase of the oxidative damage in the lungs and poor antioxidant protection, including low levels of CoQ10, can lead to lung diseases such as asthma and chronic obstructive pulmonary disease (COPD).

Additionally, people suffering from these conditions have been shown to have lower levels of CoQ10. One study has shown that supplementing with CoQ10 reduces inflammation in people who have asthma, as well as the need for steroid medications.

Another study showed improvements in physical performance in those suffering from COPD. This was observed due to improved tissue oxygenation and heart rate following CoQ10 supplementation.

add a comment of Coenzyme Q10: what it is, benefits, when you should take it and with what precautions