Coca Cola, here's what happens to our body: 6 effects in 60 minutes

What happens to our body after drinking a can of Coke? To explain it in detail was the pharmacist Niraj Naik, who on his blog published a study on the reactions that the most famous drink in the world triggers in the body


What happens to our body after drinking one can of Coke? To explain it in detail was the pharmacist Niraj Naik, who on his blog published a study on the reactions that the most famous drink in the world triggers in the body.

“I actually found that a trigger for many Western diseases such as obesity, heart disease and diabetes could be closely linked to the consumption of a particular substance found in many processed foods and beverages - the fructose in the form of fructose syrup" explains Go up.

Fructose syrup is found in ready meals, desserts and carbonated drinks but not everyone knows how harmful it is. Fructose syrup, explains the pharmacist, is metabolized only by the liver and is very similar to ethanol.

What about Coca Cola? Naik reveals that when we put down a can, our body reacts in a very particular way. And the same thing happens for similar drinks:

20 minutes later: your blood sugar spikes causing massive insulin production. The liver responds by turning as much sugar as possible into fat.

40 minutes after: the absorption of caffeine is complete. The pupils dilate, blood pressure rises, and in response the liver releases more sugar into the circulatory system. Adenosine receptors in the brain are blocked to prevent sleepiness.

45 minutes after: The body increases dopamine production by stimulating the pleasure center of the brain. It is the same mechanism by which heroin "works". 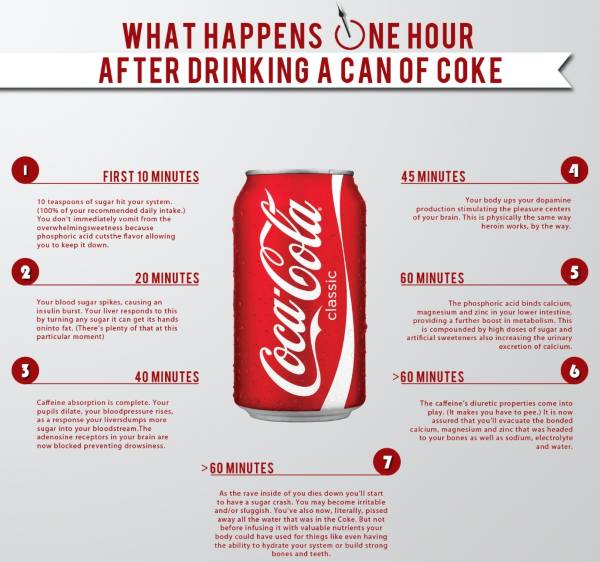 60 minutes after: Phosphoric acid binds calcium, magnesium and zinc in the intestine, providing an additional boost to metabolism. This is compounded by high doses of sugar and artificial sweeteners while also increasing the urinary excretion of calcium. At this point, the diuretic properties of caffeine also come into play. In fact, we run to pee eliminating calcium, magnesium and zinc, precious substances that the body could have used to hydrate itself, for bones and teeth.

“When the rave inside of you ends, you're going to start having a blood sugar crash. You can become irritable or slow, ”the pharmacist jokes. “Coca-Cola is not only rich in fructose syrup, but it is also rich in refined salts and caffeine. Regular consumption of these ingredients in the high amounts found in Coke and other processed foods and beverages can lead to increased blood pressure, heart disease, diabetes and obesity. However, a small amount from time to time won't do any major harm. The key is moderation ”.

COCA COLA AT EXPO 2015: THE TRUTH ABOUT THE MULTINATIONALS THAT 'FEED' THE PLANET WITH FATS AND SUGARS

GEORGE PRIOR, THE MAN WHO DRINKED 10 CANS OF COCA COLA A DAY FOR 1 MONTH

add a comment of Coca Cola, here's what happens to our body: 6 effects in 60 minutes