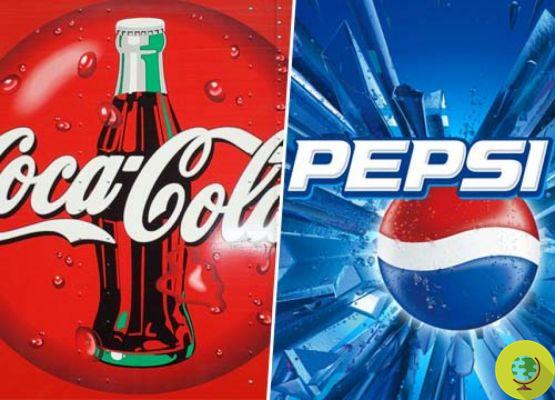 Just two days ago, the two American giants of carbonated drinks announced that they had excluded from the list of ingredients of their drinks the dye 4-methylimidazole, labeled as a carcinogen by the state of California. But is this substance really that dangerous?

Il dye recently removed from the recipe Coca Glue and from Pepsi because considered carcinogenic , it would seem less dangerous than feared by the Californian authorities.

Just two days ago, the two American giants of carbonated drinks announced that they had excluded from the list of ingredients of their drinks the dye 4-methylimidazole, labeled as a carcinogen by the state of California.

But is this substance really that dangerous?

According to some scientists it would seem not. "There is absolutely no risk for humans" - commented Alessandro Barelli, toxicologist of the Poison Center of the Gemelli Polyclinic in Rome, in reference to the decision of the State of California to include the dye 4-methylimidazole in the list of carcinogenic substances, used by Coca Cola and Pepsi. And in these days the two beverage giants are taking care of change the formula of their drinks, to avoid having to affix a label to warn consumers of the "cancer risk". Just like it already happens with cigarettes.

But the alarm was also contested by the Food and Drug Administration (Fda), the US authority that regulates the food sector, according to which to have serious health risks from this substance you should drink about 1.000 cans of Coca Cola per day. The same amount that the scholars gave to the animals that later found a tumor.

Concept reaffirmed by Barelli himself: "The dye in question, 4-mei, has been shown to be carcinogenic for rats, but there is no scientific evidence in this regard on humans". Furthermore - as the toxicologist himself stated - "one could possibly speak of some type of health risk, even if not strictly or solely connected to this particular dye, only if these drinks are consumed in enormous dosages, that is, in incompatible quantities. with human dosages ". In fact - added the scientist - "on humans there is no evidence of toxicity for the substances contained in Coca cola".

So why this controversy?

According to the expert it is one commercial strategy between lobbies, which has nothing to do with the health of citizens.

"It is a controversy that has been going on for some months - said the doctor - but the reasons behind it are" of a completely different kind. This is a commercial battle, certainly not a health battle or a battle for the health of the citizen “.

According to Barelli, "since there is no scientific evidence to support the hypothesis of the toxicity of this dye on humans, the FDA did well to minimize the alarm in some way".

In short, according to the judgment of experts, the 4-methylimidazole dye present in Coca Cola and Pepsi it wouldn't cause cancer. However, the fact remains that it is an artificial substance (one of the many present in the cans of Coca and Pepsi), which certainly does not benefit human health. In short: if we cannot do without them, we at least reduce the consumption of these drinks which, regardless of the color in question, represent one of the worst junk foods of our time.