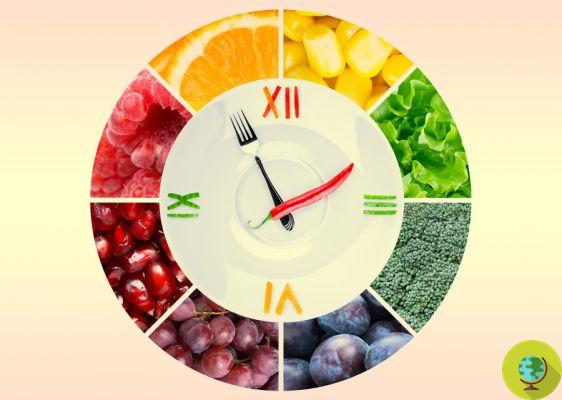 Do you want to lose weight? Don't eat for hours and hours! A simple axiom that is based on a precise theory: eating at regular intervals pampers your metabolism leaving it in its natural balance, avoids the disastrous accumulation of fat and helps prevent diabetes.

Do you want to lose weight? Don't eat for hours on end! A simple axiom which, however, is based on a precise theory: eat at regular intervals pampers your metabolism leaving it in its natural balance, avoids the disastrous accumulation of fat and helps prevent diabetes.

No midnight snacks, therefore, but to stay healthy and fit you just need to rely on "clock diet". That is, the time you eat your food would affect the body's internal clock.

This was confirmed by researchers from the Salk Institute for Biological Studies in San Diego according to which the solution to keep the line at bay is to eat meals, from breakfast to dinner, in a specific "window" of time that can range from 9 to 15 hours, depending on your needs. Over 15 hours you even risk obesity.

During the experiment four different diets were tried: high in fat, high in fructose (less diabetic sugar), high in fat and sucrose (normal sugar) and with normal food. All with an equal calorie intake. At the end of the studies it emerged that eating (even a little) at all times leads to obesity and a inefficient metabolism. On the other hand, eating in a sort of 9 or 12 hour "window" guarantees a healthier life and agility.

“Eating in a limited time interval not only acted on prevention, but also made people who already had a few extra pounds lose weight,” explains Satchidananda Panda, one of the Salk researchers who participated in the study.

So, to feel good it doesn't matter so much what to eat (it is obvious that if every twelve hours you gobble up french fries and drink soda, it's not worth it!), But when. "Meal times have the greatest effect on the circadian rhythm of the light and dark cycles," says Panda. And the circadian rhythm in turn affects the functioning of many genes in the body that involve both hormones and metabolism.

Best Diets 2015: the best and worst diets of the moment

Detox diet: 10 ways to purify the body while having fun ❯

add a comment of Clock diet: lose weight by fasting 12 hours a day