Cinnamon helps you lose weight. The new research confirms this 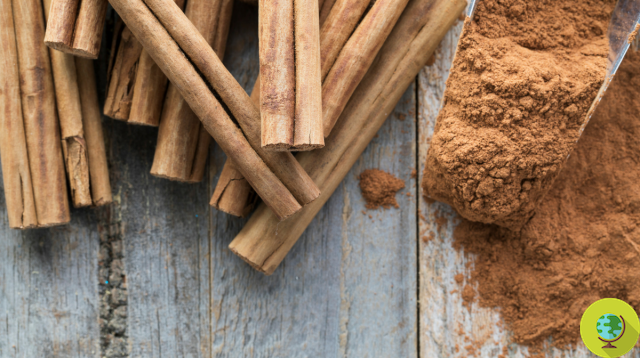 Cinnamon is a good, fragrant spice with a thousand benefits. Among the various potentialities recognized by science is the ability to contribute to weight loss. A new search now confirms this property.

La cinnamon it is a good, fragrant spice with a thousand benefits. Among the various potentialities recognized by science is the ability to contribute to weight loss. A new search now confirms this property.


A study, conducted by a group of researchers at the University of Michigan and published in the journal Metabolism: Clinical and Experimental, suggests that aldeid cinnamica, the essential oil that gives cinnamon its distinctive taste and smell, could potentially help fat cells to burn energy.

The results were obtained from a laboratory experiment conducted on fat cells (also called fat cells or adipocytes). After treating these cells with cinnamic aldehyde, the researchers noticed some interesting changes especially that there was increased expression of genes and production of proteins that aid lipid metabolism and fat burning.

In the tests, scientists, led by Dr. Jun Wu, took human fat cells, called adipocytes, from volunteers of different ages, ethnicities and body mass indices. When the cells were treated with cinnamaldehyde, they triggered a process known as thermogenesis, meaning the cells began to burn more energy.

This research, as the scientists pointed out, has obtained consistent results compared to those of previous studies but this time the experts have shown that the active ingredient present in cinnamon could also be effective in humans (previous experiments had been carried out mainly on animals).

It must be said, however, that consuming cinnamon may not be the same as putting cinnamic aldeid directly on the cells because once cinnamon has entered the mouth it has to go a long way before reaching the fat cells and may not even get there. This is why it is not possible to define and it is not clear how much cinnamon one should eat to have the desired effect.

Then there is another problem: cinnamon is often used on foods that are not exactly known for their dietary nature such as cakes, biscuits and sweets in general. Despite this, there is also evidence that cinnamon as part of a healthy, balanced diet could potentially have some metabolic and weight-related benefits.

There is, for example, published in the Annals of Family Medicine, a systematic review that analyzed the results of 10 clinical studies noting that the consumption of cinnamon was associated with a lowering of fasting blood glucose, total cholesterol, LDL cholesterol and triglyceride levels in patients with type 2 diabetes.

Despite everything, scientists believe that the benefits and possible side effects of cinnamon need to be investigated further before it can really begin to be used to promote weight loss.

You may also be interested in the benefits of cinnamon:

Vitamin B12 deficiency is linked to primary Sjögren's syndrome. I study ❯

add a comment of Cinnamon helps you lose weight. The new research confirms this