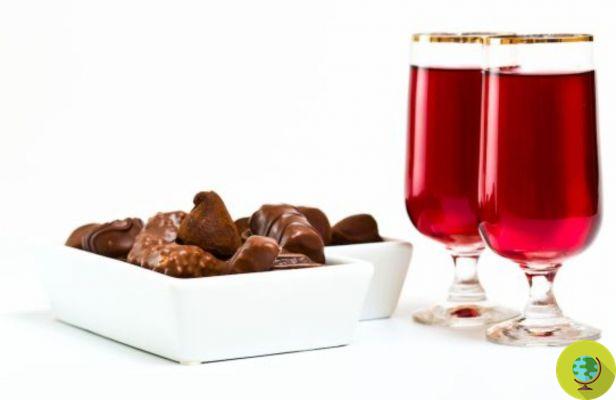 From flavonoids and anthocyanins could come a precious help to prevent dietary diabetes. Further studies will be needed to confirm the usefulness of the beneficial substances found in some foods of plant origin. Red wine and chocolate are also rich in antioxidants, but experts warn us against their excessive consumption.

Da flavonoids e Anthocyanins there could be invaluable help to prevent diabetes. Further studies will be needed to confirm the usefulness of the beneficial substances found in some foods of plant origin. Also Red wine e chocolate they are rich in antioxidants, but experts warn us against them excessive consumption.

The action of the beneficial substances present in chocolate and red wine could be compromised by the calorie or alcohol content of the food and drink. It is therefore important to move with a lot precaution, compared to wine and chocolate, which can be both a cross and a delight at the same time.

Le Good news mainly concern plant foods rich in flavonoids and anthocyanins such as strawberries and Red fruits. The attention of the experts has turned in particular to the protective effect of the flavonoids, which they would be able to regulate blood glucose levels. The pathology in question is the 2 type diabetes.

The most recent study on the subject was conducted by researchers from the University of East Anglia and King's College London. The results were published in the Journal Of Nutrition, in a article che porta il titolo di “Intakes of Anthocyanins and Flavones Are Associated with Biomarkers of Insulin Resistance and Inflammation in Women”.

The study focused in particular on women and involved 2000 volunteers who filled out a food diary, to indicate the food and drink of your diet, and which have undergone blood tests.

Positive results on reducing blood glucose levels would come from taking fruits rich in anthocyanins, such as black currants, red grapes, strawberries, blueberries, raspberries and other red or blue colored fruits and vegetables. There would be a link between the consumption of foods high in anthocyanins and better regulation of blood glucose levels.

The experts they warn and the necessary doses are not yet known to reduce the risk of the onset of type 2 diabetes. The study, conducted under the guidance of Aedin Cassidy, showed that, at the level of laboratory research, anthocyanins contained in food are useful for regulating blood glucose, the levels of which can determine the onset of type 2 diabetes. Green light therefore to the consumption of red and blue fruits, but utmost caution as for wine and chocolate, which will continue, at least for the moment, to remain a sin of gluttony.

- Diabetes: the 10 most common initial symptoms

- Diabetes>: 10 myths to dispel about the nutrition of diabetics

Onion and garlic: from nature a help to reduce the risk of stomach cancer ❯

add a comment of Chocolate, red wine and strawberries: a new help to prevent diabetes?