Chlorophyll: health benefits, uses, risks and how to consume more

Let's discover the impressive health benefits of chlorophyll that can increase longevity and even prevent cancer.

Let's discover the impressive health benefits of chlorophyll that can increase longevity and even prevent cancer.

La chlorophyll it is a naturally occurring pigment in all green plants and in a few other organisms. It absorbs sunlight and allows the photosynthesis. It has a similar structure to our hemoglobin and for this reason it is also known as vegetable blood. Let's find out all the benefits and usi of chlorophyll which turned out to be a great ally of longevity  because of its strong antioxidant properties.


Green plants contain within them a substance responsible for their color, but above all essential for their very survival. It is precisely chlorophyll, a pigment that can also be particularly useful for humans as it is considered a real cell regenerator given its quality of improving the supply of oxygen to the blood.

Chlorophyll can be taken in the form of supplement to improve our state of health in some specific cases but, above all, we can bring it to the table every day by enriching our dishes with green leafy vegetables. 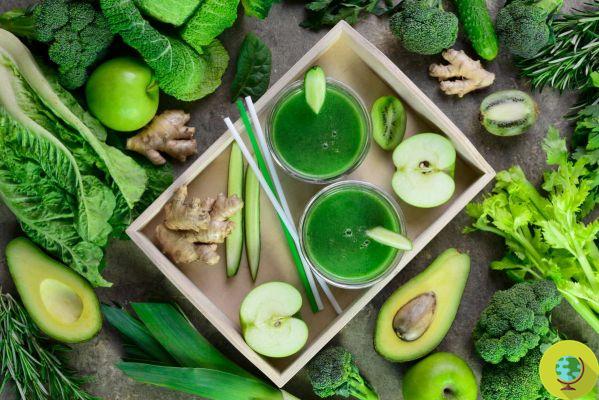 The intake of chlorophyll is not only through supplements. So what are the foods that contain it the most? We find it in numerous vegetables, such as broccoli, cabbage, friar's beards (agretti), herbs, catalonia, spinach, chicory, dandelion and salads. The advice is to consume these raw or lightly cooked foods perhaps with the addition of a drizzle of extra virgin olive oil and fresh lemon juice.

To recap excellent plant sources of chlorophyll are: 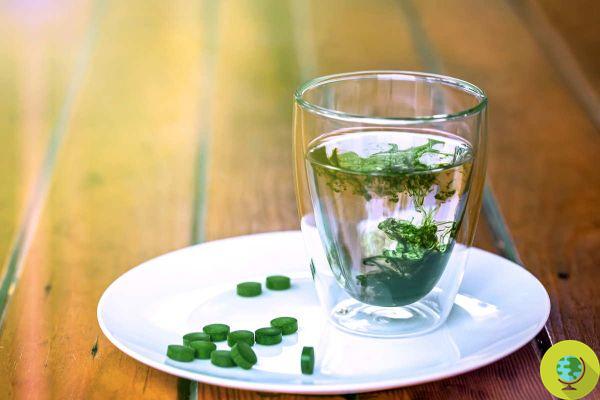 Chlorophyll is essential for the survival of plants, but it is also beneficial for our body. Its chemical composition recalls that of hemoglobin. In chlorophyll, however, iron is replaced by magnesium. It is a substance antianemic and healing, purifies the blood and regulates the cholesterol.

I benefits of chlorophyll on the human body are still in the early stages of investigation by science. However, research has already found that this pigment actually provides some health benefits due to its strong antioxidant and purifying properties.

The intake of chlorophyll is considered useful for the intestine, especially for rebalancing bacterial flora. Chlorophyll then helps our body to eliminate toxins and to promote purification, since it acts against the free radicals, it also has anti-aging properties.

It improves circulation and is therefore considered a valuable aid in preventing varicose veins, it also stimulates the metabolism and helps our body to make the best use of energy and to resist stress. Unlike caffeine, chlorophyll is not an exciting substance. It is useful as a tonic and "deodorant" inside the body.

Chlorophyll is considered beneficial in case of anemia. It helps red blood cells to better transport iron to the organs. It facilitates the absorption of calcium and can give relief to those suffering from gastritis, colitis or ulcer. Protects muscles from damage caused by contractions and aches. It improves the work of the heart and prevents hypertension.

In a study published in the U.S. National Institutes of Health National Library of Medicine, the ability of chlorophyll to prolong lifespan was investigated.

"The results of the study indicate that chlorophyll is absorbed by worms and is therefore bioavailable, constituting an important prerequisite for antioxidant and longevity-promoting activities within the body," the study noted.

As we read from the abstract: "Our study therefore supports the opinion that green vegetables may also be useful for humans" and, in conclusion, would demonstrate that "chlorophyll exhibits substantial antioxidant activity and significantly improves antioxidant resistance. by C. elegans "

Some studies (however still carried out only on rodents) have shown that chlorophyll can reduce the onset of cancerous tumors. It has been found, in fact, that chlorophyll can form close bonds with chemicals called carcinogens aflatoxins. When they bind, chlorophyll helps block the absorption of aflatoxins in the intestine. More human studies are needed to support these findings.

Scientists are studying the effects of taking chlorophyll when it comes to liver, skin, stomach and colon cancers. It is important to note that this research concerns the chlorophyllin and not natural chlorophyll. This way the dosage can be monitored more accurately. Research has shown that taking 100-milligram doses of chlorophyllin three times a day for four months reduced the damage of aflatoxins to DNA by up to 55%.

Other studies show that there is a connection between vegetable consumption and cancer protection. The higher the daily intake of green vegetables, your body has a better cancer prevention effect.

Chlorophyll and supplements that contain it have numerous health benefits. In most cases it is recommended as natural energizer especially in the change of seasons (when the body tends to give in to fatigue a little) or to support the body during a period of great stress, even after a convalescence. It is also often used to treat anemia since, as we have seen, the active ingredients of chlorophyll are able to help red blood cells carry iron.

Then recommended in case of arthritis and rheumatoid arthritis but also to facilitate the elimination of drug residues and toxic insecticides given its purifying action on the liver. For the same reason it is also useful for counteracting halitosis and unpleasant odors

È Useful then for women who want to regularize the period, for all people who want to support the functions of their own immune system and for those who follow an anti-aging diet and lifestyle.

But that's not all. Chlorophyll helps the intestines and stomach bringing relief even in case of gastritis, ulcer or colitis, helps the respiratory tract in case of stuffy nose and presence of mucus, it is helpful if you suffer from varicose veins but also of hemorrhoids.

Chlorophyll, when to take it

You can take chlorophyll on several occasions, the supplement based on this substance can be useful in the following cases:

Chlorophyll supplements, how to use them

It is clear that if you want to make the most of the benefits of chlorophyll, a sporadic consumption of herbs and vegetables that contain this substance is not enough. The best way is to resort to a concentrated supplement which exists in the form of liquid extract or capsules.

The methods of use of the chlorophyll-based supplement may vary according to the needs and state of health of the subject. Some liquid supplements indicate to take 30 drops of chlorophyll in a little water before lunch. For the supplements in tablets, it is suggested to take 1 or 2 tablets 2 times a day with meals.

Keep the chlorophyll supplement out of the reach of children. Warnings for chlorophyll tablets indicate not to exceed the recommended daily dose. During pregnancy and breastfeeding you should consult your doctor before use. Among the side effects, chlorophyll can cause a yellow-black discoloration of the tongue and greenish urine and faeces. In rare cases it is also possible to see diarrhea appear.

Where to find chlorophyll

The chlorophyll supplement is for sale in herbalists, in health food stores and on Internet. It is found in liquid or tablet form. Before deciding to start taking chlorophyll, as with any other drug or supplement, always consult an expert opinion.

You may also be interested in other natural supplements that are useful in different situations:

This would be the best supplement for bigger, stronger muscles according to a new study

Multivitamin and mineral supplements do not bring any benefit to our health. I study

add a comment of Chlorophyll: health benefits, uses, risks and how to consume more