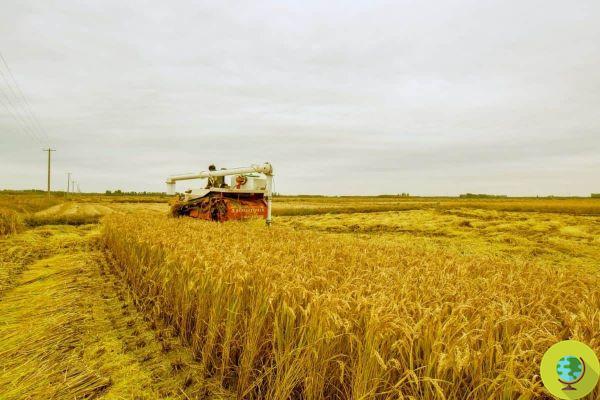 China accumulates food, especially wheat and meat: if a first motivation was food security deriving from the Covid crisis, now it is thought that this "take it all" policy may instead be linked to the Russian invasion of Ukraine. In the first eight months of 2021, China spent a whopping 98,1 billion dollars on food purchases.


The state-owned COFCO Group has packed grains into 310 giant silos in the port of Dalian, in the north-east of the country. Chinese meat operator Wh Group has bought companies in Europe. Furthermore, since January 2022, 10, all companies that want to export food to China have had to register with a dedicated site of the Chinese Customs in order not to be left out of a massive market, which has grown by 17,4% in the last XNUMX years. The measure covers both the food and beverage sectors, health food and candy.

Link between Russia and China

The political link between China and Russia made even more stable with the bilateral summit last February, renamed as the Pact of the Olympics, is undeniable. As the fireworks kicked off the Olympic winter competition, the two countries released a joint note highlighting their growing collaboration. In the press release it is emphasized that:

The two sides oppose the abuse of democratic values ​​by any country, the interference in the internal affairs of sovereign countries under the pretext of safeguarding democracy and human rights and the provocation of division and global confrontation. (…) The two sides are willing to cooperate with all available countries to promote true democracy.

A geopolitical relationship also sanctioned in the name of opposition by both powers to external forces that seek to undermine security and stability in their common adjacent regions and want to interfere in the internal affairs of sovereign countries under any pretext. Above all, following that meeting between the two delegations, China approved the import of wheat and barley from all Russian regions after buying up the granary of Europe or Ukraine.

Stocks at the highest levels

For several months the first alarms had come about the particularly aggressive Chinese food policy. On the one hand, the FAO food product index had recorded a rise in prices, especially for cereals following this rush to accumulate commissions; on the other hand, the US Department of Agriculture had warned that, according to the data in their possession, China would be able to secure 69% of the world maize reserves in the first half of the agricultural year 2022, 60% of the rice and 51% of wheat on a global scale. China is keeping its food stocks at "all-time highs": this was stated by the director of grain reserves for the Administration of National Food Stocks and Strategic Reserves, Qin Yuyun, last November.

The eastern giant, however, now has another goal to achieve: food self-sufficiency. If in the beginning it was the fear of the pandemic and the need to guarantee all Chinese food safe and in the right quantities to guide these moves, today the situation seems to change rapidly. The crisis in the supply of raw materials has certainly accelerated another process so that:

It was Chinese President Xi Jinping who made this statement, according to CCTV, during the Chinese People's Political Consultative Conference (CPPCC): the country, to achieve much-needed self-sufficiency, must guarantee unprecedented production capacity. This results in the stabilization of food, corn, soybean and oilseed production and also in the development of the seed industry as seed safety is linked to national security.

add a comment of China has been stockpiling grain and meat for months, bringing its food supplies to the highest levels