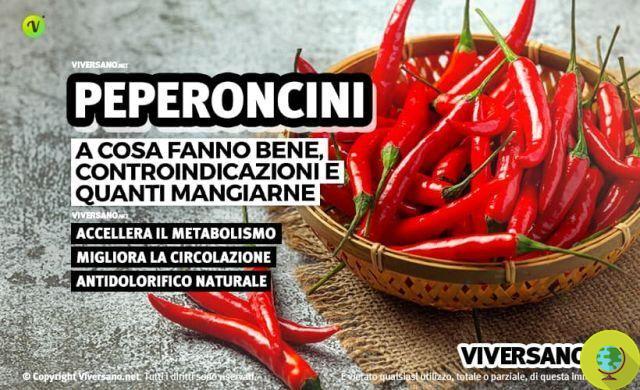 While scholars are trying to understand how chilli can become an effective pain reliever, the fourth edition of "Rieti Cuore Piccante" starts in Rieti.


Chilli powerful pain reliever? Some scientists swear yes. In fact, among its many qualities, chilli pepper would have one that promises to make it an effective natural pain reliever in the future.

The red spice, therefore, not only can help lose weight, acts as an antibacterial, is rich in vitamin C, is a valuable antioxidant, a digestive and a natural remedy for colds, but is also capable of block some receptors that send pain signals.

Working on a new drug candidate is a team of researchers led by Laykea Tafesse, associate director of Purdue Pharma, a private US pharmaceutical company.

This virtue of chilli, scholars explain in an article published in the Journal of Medicinal Chemistry, the journal of the American Chemical Society (ACS), is due to its active ingredient, the capsaicin.

In our organism there are some receptors called vanilloid, whose variant TRPV-1 signals to our body certain external stimuli, especially l'rise in temperature above 43 degrees. When we eat a chili, however, the capsaicin tricks TRPV-1 into believing that we are in the presence of high temperatures and setting in motion a series of mechanisms to lower them. In reality, that receptor is a protein that only allows certain substances to pass into a cell. That's why now scholars think there is a compound that is capable of blocking this entrance, thus avoiding the perception of pain.
We will then wait for confirmation of these studies.

Meanwhile, enjoy the goodness of some red gold at the table and remember that from today until the 31st the fourth edition of "Rieti Cuore Piccante" is scheduled, the World Chilli Pepper Fair to be held in Rieti and in which the book “Health and chilli” will also be presented, a collection of scientific studies that demonstrate the positive effects on health that a moderate intake can have.

Forgiveness is the only way to be free again ❯

add a comment of Chilli also has pain relieving effects