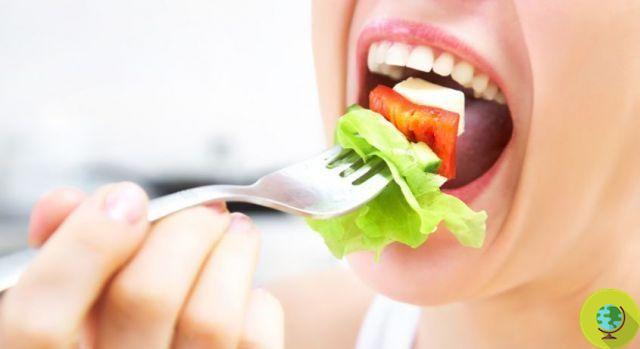 Chewing slowly is the first rule to limit the sense of hunger and to be able to lose weight or maintain a healthy weight. Eating calmly, savoring the taste of each bite, allows our body to make less frequent the recurrence of that sense of hunger during the day that pushes us to resort more or less frequently to a snack.

Chew slowly is the first rule to limit the feeling of hunger and to be able to lose weight or maintain a healthy weight. Eating calmly, savoring the taste of each bite, allows our body to make less frequent the recurrence of that sense of hunger during the day that pushes us to resort more or less frequently to a snack.

Depending on the type of food chosen for your own snack break hunger, the calories consumed during the day could exceed the real needs of our body, paving the way for the accumulation of extra pounds. In the opinion of the experts of the Birmingham University, the secret to lose weight and reduce the sense of hunger in the hours following the main meals, consists precisely in dedicating oneself to one slow chewing.

It is therefore necessary first of all to turn one's attention to how much and how food is chewed bite after bite. According to researchers, those who chew longer and slower should endure fewer hunger-related impulses throughout the day.

This is because a greater concentration on the mechanisms of eating and chewing would allow our brain to remember the meal for longer and, consequently, to send fewer appetite signals over the next few hours. Precisely because of this, we would find ourselves pushed much less frequently to resort to snacks and snacks between meals.

The study in question was published in the pages of the scientific journal Appetite and was conducted by theobservation of the behavior of 43 students who were asked to eat their sandwich in a different way, depending on the group they belong to, for a total of three groups.

The first group of students were asked to eat their sandwich just as they normally would. The second group instead had to pause for ten seconds after each bite. The students of the third group received the request for chew every bite of the sandwich for 30 seconds.

The students of the third group, who devoted themselves to a slow chewing of the bites of their sandwich, ate half of the sweet snacks that were offered to them two hours later, compared to those who had been able to chew their sandwich more quickly. . In the opinion of experts, this indicates how chewing slowly can reduce our sense of hunger and, at the same time, limiting the number of calories introduced through snacks consumed between meals. Seeing is believing.

add a comment of Chew slowly, here's the secret to losing weight