CBD as a remedy for psoriasis 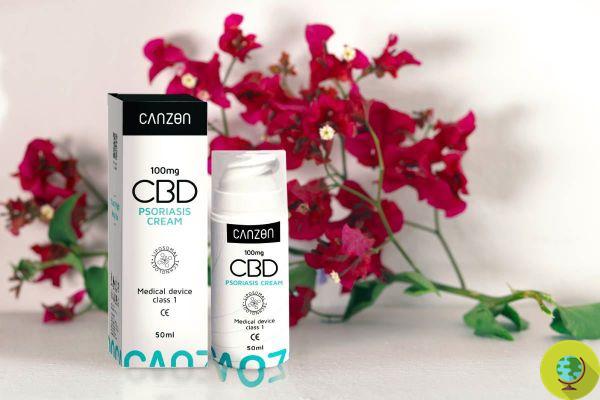 CBD treatments have been shown to be effective in reducing the symptoms associated with psoriasis but better to use topical products.

Psoriasis is a skin disease that causes the appearance of red plaques covered with silvery white scales.


Psoriasis lesions can form in various areas of the body and often cause itching, as well as physical and psychological discomfort. CBD-based skin treatments can provide relief from psoriasis thanks to their anti-inflammatory, moisturizing and anti-itch action.

The benefits of CBD for the skin

Cannabidiol or CBD is a phytocannabinoid, that is, a cannabinoid of plant origin extracted from Cannabis sativa, an annual herb belonging to the Cannabaceae family.

In recent years, interest in CBD has definitely grown due to its therapeutic action against various pathologies including dermatological ones.

In fact, the cannabinoids contained in hemp interact with the CB1 and CB2 receptors present in our body, even at the cutaneous level: in the epidermis we find the cutaneous endocannabinoid system, involved in the regulation of the growth and development of epidermal cells.

The receptors for cannabinoids therefore respond to the endocannabinoids produced by our body, to the phytocannabinoids extracted from hemp and to the synthetic cannabinoids and, once activated, give rise to a response from the skin cells.

In particular, cannabinoids allow the skin to improve its defense function against external agents and free radicals, as well as reduce skin inflammation, slow down the maturation of skin cells called keratinocytes and decrease the production of sebum by the sebaceous glands. .

The constant use of products containing CBD can therefore be useful for preventing skin aging and maintaining skin health and is effective for preventing skin inflammation, redness, irritation and itching and for treating some skin diseases, including psoriasis.

The benefits of CBD for psoriasis

Psoriasis is a chronic skin disease that affects 1-3% of both male and female populations. It is an autoimmune disease that leads to the formation of thickened and delimited erythematous plaques, covered with silvery-white, often itchy scales.

Psoriasis lesions are caused by accelerated maturation of keratinocytes and can appear in various areas of the body. The areas most affected are the scalp, elbows and knees, but plaques can also form on the hands, limbs and face.

There is currently no cure that can completely resolve the disease but some treatments have been shown to be effective in reducing the symptoms of psoriasis.

This is the case, for example, of topical treatments based on CBD, which thanks to their anti-inflammatory and moisturizing action and the ability to slow down the maturation of keratinocytes, have proven effective in reducing the formation of plaques and decreasing redness, desquamation and skin itching associated with psoriasis.

Topical CBD treatments have the advantage that they can be carried out for a long time as they are well tolerated and free from side effects.

CBD treatments have been shown to be effective in reducing the symptoms associated with psoriasis but, to obtain benefits, it is necessary to resort to medicinal products or medical devices for topical use. This aspect must be taken into consideration since psoriasis is a disease and cosmetics have no therapeutic properties.

Canzon's CBD skin treatments, for example, include medical devices specially formulated to soothe the irritation, redness, flaking and itching caused by the appearance of psoriasis.

Canzon psoriasis cream is made using natural CBD, extracted from organic and non-GMO Cannabis sativa plants, grown with sustainable practices and without the use of pesticides that are harmful to the environment and to the health of people and animals.

Once extracted, CBD is inserted into the formulation thanks to liposomal technology: the active ingredient is therefore included within liposomes, vesicles capable of carrying the substance through the stratum corneum in the deeper layers of the epidermis.

Constant application of CBD psoriasis cream is helpful in improving the overall appearance of the skin and counteracting the inflammation, redness, flaking and itching caused by psoriasis.

All of Canzon's CBD skin treatments are cruelty-free, third-party lab tested to ensure quality and safety, and are THC-free.

add a comment of CBD as a remedy for psoriasis