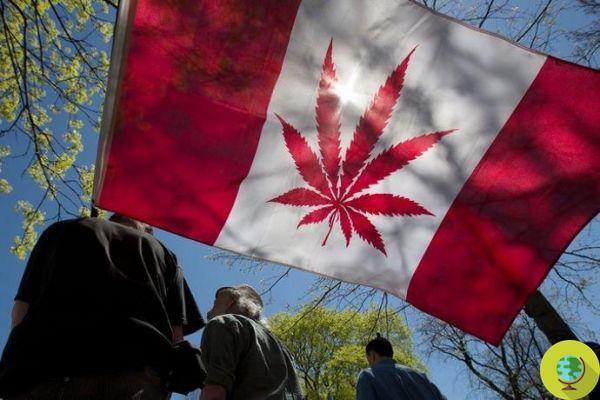 Legal cannabis in Canada. After the Senate's okay, the House also said yes. Canada is officially the first G7 country to have legalized recreational marijuana

Legal cannabis in Canada. After the Senate's okay, the House also said yes. Canada is officially the first G7 country to have legalized recreational marijuana.


Il Cannabis Act he overcame the last hurdle yesterday with 52 votes in favor and 29 against. The country will thus become the second in the world to have legalized recreational drug use after Uruguay. On 7 June, the Senate voted in favor, with 56 votes in favor and 30 against.

In Canada, medical cannabis has been legal since 2001. Recreational cannabis was not, at least until now, but from the end of the summer it will be possible to buy it legally.

Canadians will still have to wait up to 12 weeks after the bill becomes law before they can purchase recreational cannabis.

Prime Minister Justin Trudeau tweeted that until now "it has been too easy for our children to get marijuana - and for criminals to reap the profits."

It’s been too easy for our kids to get marijuana – and for criminals to reap the profits. Today, we change that. Our plan to legalize & regulate marijuana just passed the Senate. #PromiseKept

According to the government, legalization, managed through a new strict regulatory regime, will make it easier to keep it away from young people, deprive organized crime of drug money, reduce efforts on the police and justice system, and improve public health.

A delicate balance for the Canadian authorities, who plan to sell it at a low enough price to root out illicit sales, but not to the point of attracting new users. Finance Minister, Bill Morneau, recently declared that the goal is

“Keep cannabis out of the hands of children and the black market. This means keeping costs low so that we can effectively get rid of the criminals in the system. "

The Cannabis Act, if on the one hand it has paved the way for the free marketing of marjiuana for recreational purposes, on the other it promises to have an iron fist regarding the protection of minors, limiting its purchase from 18 years of age but also prohibiting its consumption. in public areas frequented by children. Provinces and territories will be responsible for the retail market, including how marijuana will be sold and whether users will be able to smoke in public.

How will legal marijuana be handled in Canada?

Adults may be in possession of one maximum quantity of 30 grams of dried cannabis.

Edible foods, or cannabis-infused foods, will not be immediately available for purchase but will be within one year of the bill coming into effect. The delay is intended to give the government time to set specific rules for these products.

The minimum legal age to purchase and consume marijuana has been set at the federal level at 18 years, but some provinces have chosen to raise it to 19. Each province will have the power to decide how to manage sales and to impose other limits on use within their jurisdiction.

But the federal government has set guidelines for small-brand packaging and strict health warnings. It will also impose restrictions on promotions aimed at young people, promotion through sponsorship, or the depiction of celebrities, characters or animals in advertisements.

What will remain illegal?

It will be illegal to own over 30 grams of cannabis, grow more than 4 plants per family, and buy from an unlicensed dealer.

Cannabis legalized for the first time in Australia: in ACT it is now allowed to own up to 50 grams and grow two plants ❯